Shopify Inc. (TSX: SHOP), Ballard Power Systems Inc. (TSX: BLDP) and Cronos Group Inc. (TSX: CRON) are the best performing stocks on the Toronto Stock Exchange (TSX), as per a new list released by the TMX Group on Tuesday. The ranking, known as TSX30, is a list of thirty top-performing stocks over a three-year period. The stocks were adjudged on the basis of share price appreciation, market capitalisation, sustained excellence and other factors.

The average three-year share price appreciation for the 30 winning stocks of 2020 was 242%. The combined market capitalization of these companies grew by C$ 221 billion in three years.

From global trade uncertainties in late 2019 to a pandemic in 2020, it has been a difficult year for investors and issuers, claimed the TSX Group in an accompanying statement.

In these COVID circumstances, organisations are navigating the quick changing landscape of the businesses and falling demands, adapting to new ways of working, it added. These 30 top-performing companies have been able to stand out in the crowd amid pandemic circumstances. The winners constantly proved their excellence, resilience and ability to grow despite the challenges in the last three years, said the group.

Canada’s largest e-commerce company Shopify’s stock has grown by nearly 138 per cent this year while Ballard’s scrips have appreciated by over 120 per cent year-to-date. 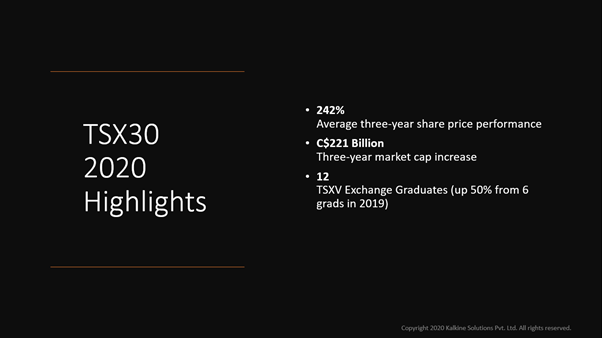 The mining cohort posted an average three-year share price performance of 223 per cent. The sector’s market cap grew 217 per cent in three years, from CS 22 billion to C$ 69 billion in 2020.

Technology and clean-tech cohort scripted the best performance with 330 per cent rise in average three-year share price performance, followed by life sciences with 244 per cent growth. 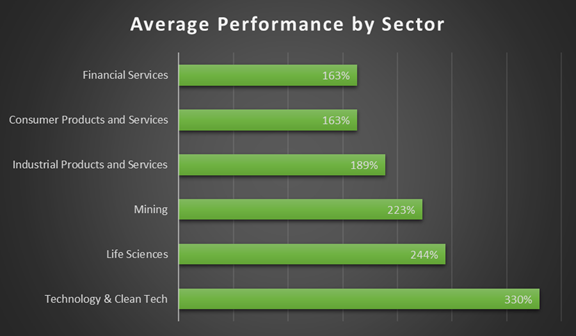 Of the 30 companies, 16 are based out of Ontario, eight in British Columbia and two in Quebec. Four international companies – three from the United States and one from Australia – also made it to the list.

The ranking methodology used to shortlist the TSX30 stocks were:

After implementing the above the ranking methodology, 546 companies were shortlisted, which were further assessed on the basis of three-year dividend-adjusted share price performance.