For risk-averse investors, Kalkine Media® have shortlisted five TSX large-cap stocks that can be explored for the long term. These Canadian companies recently announced financial results for their latest quarter. So, without any delay, let us talk about them.

Metro is among the biggest grocery and pharmacy retailers in Canada. Metro sells products under banners like Food Basics, Super C, Metro, Jean Coutu (acquired in 2018) etc. In addition, it licenses its trademarks and supplies merchandise as a franchiser. This consumer company holds a market capitalization of approximately C$ 16.8 billion.

Metro said its sales reached C$ 5.86 billion in the third quarter of fiscal 2022, denoting a year-over-year (YoY) rise of 2.5 per cent. The retail company also stated that its operating income before depreciation and amortization amounted to C$ 565.1 million in the latest quarter, 5.9 per cent up from the same quarter last year. Net profit also grew by nine per cent to C$ 275 million in the third quarter this year compared to C$ 252.4 million a year ago. Metro also declared a quarterly dividend of C$ 0.275 set to be distributed on September 21.

Stocks of Metro spiked by almost 11 per cent in 12 months. As per Refinitiv findings, MRU stock’s Relative Strength Index (RSI) value was 51.77 while writing on August 12. The RSI value falling between 30 to 70 typically denotes a moderate momentum.

Algonquin reported a double-digit surge of 18 per cent in its top line to US$ 624.3 million in Q2 2022, relatively up from US$ 527.5 million in the same quarter of the prior year. Despite revenue growth, the utility giant posted a net loss of US$ 33.4 million in the latest quarter, comparatively low from a profit of US$ 103.2 million recorded a year ago. However, the C$ 12-billion market cap company announced a quarterly dividend of US$ 0.181, scheduled to be paid on October 14, consistent with the previous pay-out.

Stocks of Algonquin Power climbed over six per cent in one month. According to Refinitiv, AQN stock held an RSI value of 70.45, indicating that the stock could start experiencing an overbought condition on August 12. 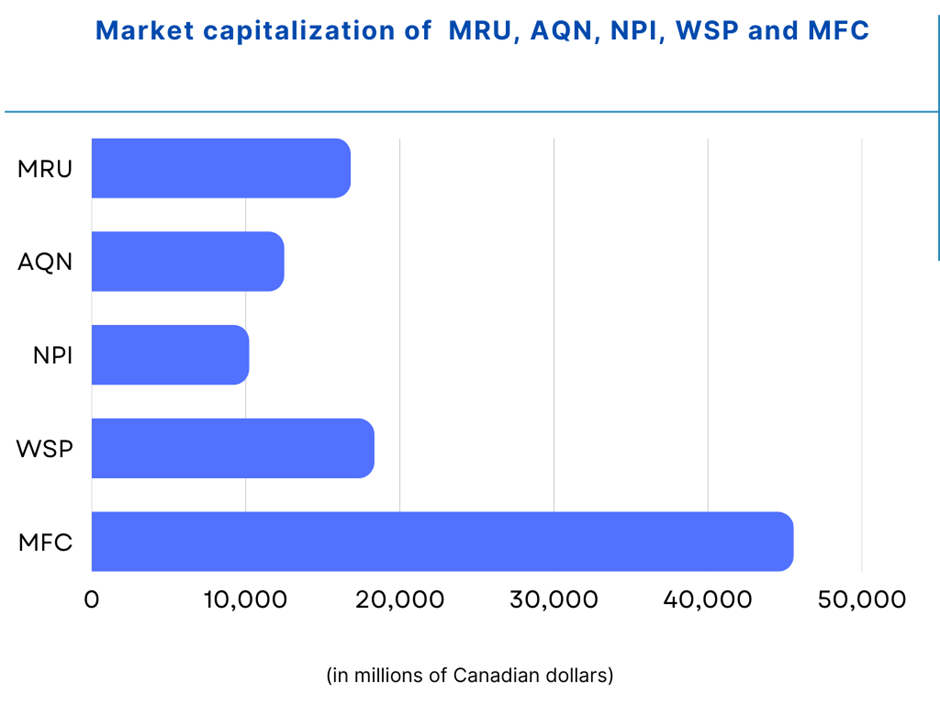 Northland Power said its financial and operational performance in Q2 2022 was stronger than expected. Following this, the utility company announced upgrading its full-year guidance for fiscal 2022 primarily based on European high market prices and 'solid' operational results.

Stocks of Northland Power swelled by over 28 per cent in six months. Refinitiv data suggests that NPI stock is on a bullish trend as its RSI value was 86.26, which denotes a high momentum, on August 12.

WSP Global reported C$ 2.76 billion in revenues in Q2 2022, a five per cent growth from the prior year's second quarter. WSP said its backlog was C$ 11.4 billion on July 2 this year, reflecting 12.5 months of revenues. However, the construction company posted a reduced net income of C$ 89.3 million in the latest quarter, comparatively low from C$ 120 million recorded in Q2 2021. Despite decreased profits in Q2 2022, WSP Global announced a quarterly dividend of C$ 0.375 timed for payment on October 15.

WSP Global revealed on August 8 that it signed an agreement to acquire RPS Group, a global consultancy and professional service provider, via its 100 per cent owned subsidiary, thereby executing its 2022-2024 global strategic action plan.

Stocks of WSP Global gained almost 17 per cent in three months. According to Refinitiv data, WSP stocks seems to be on a medium-to-high trend, with an RSI value of 63.51 on August 12.

The Manulife stocks zoomed by over eight per cent quarter-to-date (QTD). Based on the latest data from Refinitiv, WSP stocks appear to be on an uptrend with an RSI value of 67.76 (nearing the overbought level of 70) on August 12.

Equity investors with limited risk capacity can explore the TSX large-cap stocks. As all these Canadian companies pay a steady dividend, these stocks could become a reliable source of passive income.