Is there a Canadian stock market? What is it called?

TSX climbs higher with energy & financials up, loonie down

Almost every major country across the globe has its own stock market, a platform for buyers and sellers to engage in the virtual or physical trading of stocks or other securities.

The stock market is a driving force for an economy’s overall health as they are used to indicate and predict the upcoming economic events. That is the reason why industry, corporates, banks, and the State keep a close watch on the stock market buzz.

Canada is home to one of the world’s largest stock exchanges, the Toronto Stock Exchange (TSX). The TSX is owned and managed by the TMX group, which also runs other equity trading platforms like the TSX Venture Exchange, Montreal Stock Exchange, Alpha Exchange, etc.

How did the TMX Group come to be?

TMX Group operates through the following subsidiaries, including:

The group provides trading and listing markets, depository services, clearing facilities, data products and technology solutions to the financial community across the globe.

According to a June 2021 report released by the TMX Group, about 45 per cent of global mining firms are listed on the Toronto Stock Exchange and TSX Venture Exchange. In addition, there are approximately 138 oil and gas companies listed on both the stock exchanges as of June 30, 2021.

The Toronto Stock Exchange is the largest and fully automated trading platform in Canada. Incorporated in 1878, the Canadian stock exchange was initially formed as a ‘Association of Brokers’ by a group of Toronto-based businesspersons.

On the other hand, Alpha Exchange Inc, which operates as a regulated exchange, does not carry any listing activity. The TMX Group acquired the trading platform, formerly known as Alpha Trading Systems Inc, in 2012.

Ways of listing on TSX/TSXV

Listing on the stock exchanges provides the companies with access to capital, enhanced liquidity, specialized indices and exposure to international institutional investors.

There are multiple pathways available for listing on the two fully automated trading platforms, such as: 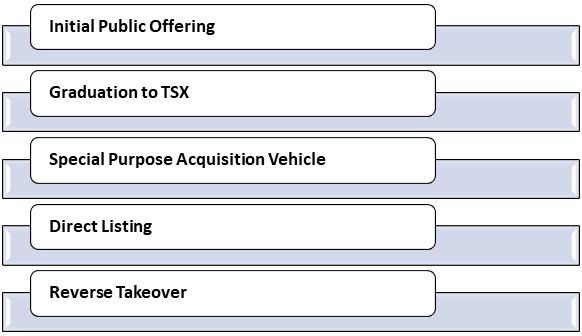 This is one of the most traditional methods of an obtaining listing on a stock exchange. It requires filing of a prospectus with the designated securities commission, followed by an application for listing.

With this ‘back-door listing’ route, the private companies can bypass the process of going public via an IPO. Therefore, it is commonly called as Reverse initial public offering or Re-IPO.

Also known as a direct placement or a direct public offering, this method can see a firm get publicly listed by presenting its shares directly to potential investors, without going via the medium of underwriters or intermediaries.

In addition, direct listing is said to provide the companies with access to broader pool of investors and enhanced scope for listing in other markets.

A special purpose acquisition company merger is an alternative route vehicle for listing a company.

A SPAC acts as an investment vehicle and is formed as a corporation with no assets or commercial operations other than cash. Informally known as ‘blank check company’, SPACs are basically formed with an objective to raise initial capital through an IPO.

What all is listed on the TSX and TSXV?

As of June 30, 2021, there were approximately 3,380 listed issuers on the Toronto Stock Exchange and TSX Venture Exchange, as per the company’s MiG report. 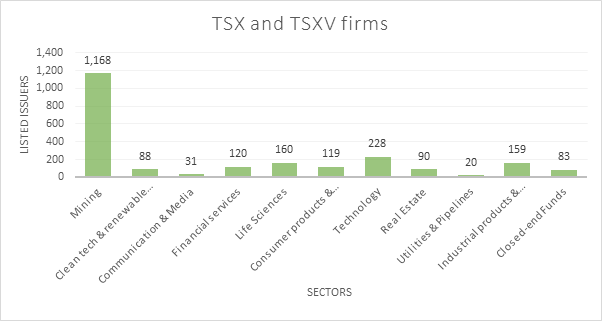 The TSX has on it:

Closed-End funds refer to a collective pool of equities that raise a fixed amount of capital through initial public offering. The closed-end funds are often non-redeemable, which means investors cannot purchase or redeem the units after the ‘New Fund Offer’ period ends.

The pool consists of different types of funds, including:

There are over 125 closed-end funds listed on the Toronto Stock Exchange. The pool of funds provides exposure to different asset classes, investment strategies and various sectors, including consumer, real estate, energy, infrastructure, etc.

It is a basket of securities that is publicly traded on the stock exchanges and helps investors track diverse sectors, indices, commodity, or other assets.

There were about 836 Exchange-Traded Funds listed on the Toronto Stock Exchange, as of June 2021, representing a total market capitalization of approximately C$ 296,000.

According to the June 2021 TSX ETF Report, the following were among the top ETF options by volume in the second quarter of this year:

Therefore, it is safe to say that Canada has a very active scene in terms of stock exchanges. Although the onset of the pandemic had seen the market crumble in March 2020, it appears to be of a path to recovery amid inoculation drives and reopening economies.