The possibility of economic contraction seems to threaten investors worldwide, resulting in market volatility. In Canada, the TSX benchmark index lost almost eight per cent in 2022 as macroeconomic factors continue to impact the global stock markets. However, a defensive approach can help investors manage their portfolios based on their risk levels amid market downturns.

Here are five TSX defensive stocks selected by Kalkine Media® that could be explored amid economic uncertainty. Let us look at these Canadian companies' financial statements and stock performance.

Telus's internet service company saw its operating revenue climbed 6.4 per cent to C$ 4.37 billion in Q2 2022 relative to C$ 4.1 billion in the second quarter last year. The large-cap telecom operator reported 247,000 net customer additions during the latest quarter, representing an increase of 24,000 over Q2 2021. Telus saw its bottom line rise by 44.8 per cent year-over-year (YoY) to C$ 498 million in the second quarter of this fiscal 2022.

Telus said its total telecom subscribers reached 17.32 million in the quarter ended on June 30, 2022, up from 16.29 million a year ago. In addition to its Q2 2022 financial results, Telus also boosted its quarterly dividend to C$ 0.3386 scheduled for payment on October 3.

The T stock gained by over three per cent in one year. According to Refinitiv findings, Telus stocks recorded a Relative Strength Index (RSI) value of 46.11 (moderate trend) on Thursday, August 4.

BCE announced on August 4 announced a large-scale investment of over C$ 650 million to deploy its broadband infrastructure in partnership with the Ontario government (investing C$ 484 million) for the Ontario Accelerated High-Speed Internet Program (AHSIP).

The telecommunication service provider said its operating revenues zoom by 2.9 per cent to C$ 5.86 billion in Q2 2022 compared to the same quarter last year. However, the broadband company posted a net income of C$ 654 million in the latest quarter, lower than C$ 734 million a year ago. Despite reduced profitability, BCE announced a quarterly dividend of C$ 0.92 on October 15.

The BCE stock shot up by nearly three per cent in 52 weeks. According to data gathered from Refinitiv. BCE stocks saw an RSI value of 50.53 on August 4, signalling a moderate market condition. 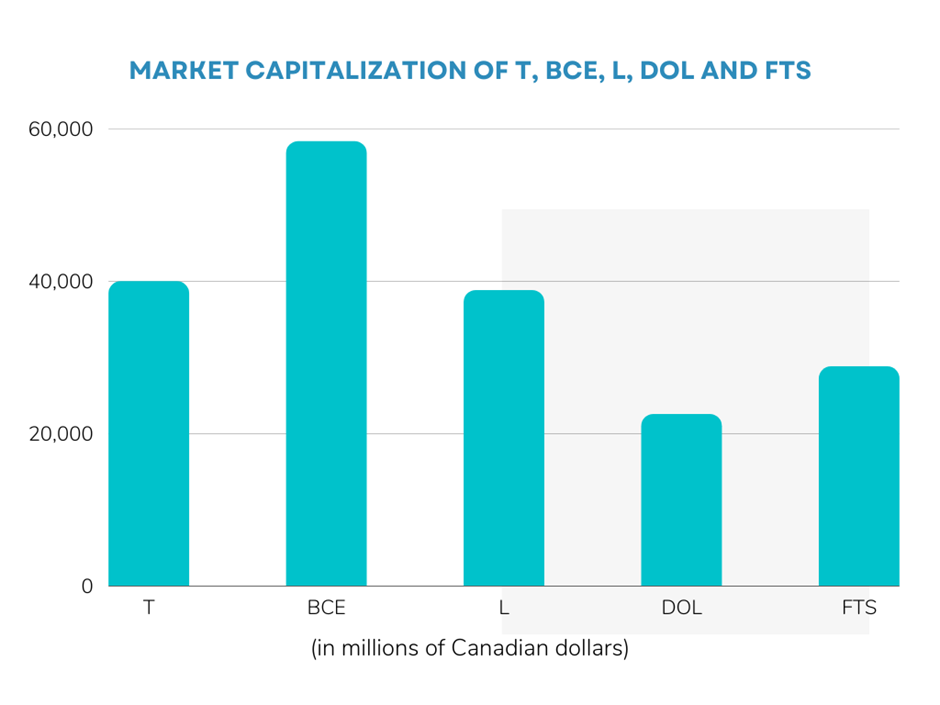 Food and drug store owner Loblaw posted revenue growth of C$ 356 million or 2.9 per cent to C$ 12.84 billion in Q2 2022 compared to Q2 2021. The Canadian retailer company said its retail segment sales increased by 2.8 per cent while e-commerce sales reduced by 17.5 per cent in the latest quarter compared to last year's period.

Loblaw will deliver a quarterly dividend of C$ 0.405 on October 1. Stocks of Loblaw spiked by over 14 per cent year-to-date (YTD). As per Refinitiv findings, Loblaw stocks saw an RSI value of 52.24 on August 4.

Dollarama said its sales grew by 12.4 per cent YoY to C$ 1.07 billion in Q1 FY2023, primarily helped by the eased COVID-19 rules nationwide. The Canadian retailer reported a growing gross profit of C$ 451.89 million in the latest quarter, higher than C$ 403.44 million in the first quarter of  the previous fiscal year. Dollarama also improved its net income to C$ 145.5 million in Q1 2023 relative to C$ 113.57 million a year ago. The discount retail owner and operator is set to distribute a quarterly dividend of C$ 0.055 on August 5.

DOL stocks gained by over 35 per cent in nine months. According to Refinitiv data, DOL scrips appeared to be on a moderate trend with an RSI value of 57.21 and trading volume of 1 million on August 4.

Utility service company Fortis posted an increased net profit of C$ 284 million in Q2 2022, up from C$ 253 million in Q2 2021. The C$ 28 billion market cap company said that this increase in profitability was mainly supported by rate base growth and growing earnings from the energy infrastructure division.

Fortis will also pay a quarterly dividend of C$ 0.535 on September 1. The FTS stock galloped by over seven per cent in nine months. As per Refinitiv, FTS stocks appeared to be on a mixed trend, with an RSI value of 47.24 on August 4.

Investors on the hunt for quality defensive stocks might explore the stocks further given in this article as they could also provide passive income.