The Canadian benchmark index, the TSX Composite Index declined ~289 points or 1.41 per cent to 20,174.14 on Tuesday, September 28. The weakness was driven by a fall in the Information technology sector, which was down 3.71 per cent, followed by base metals, which was down 1.56 per cent, and the healthcare sector lost 2.02 per cent.

Rising inflationary pressure is fanning a lot of uncertainties in the market, and a resurgence in COVID-19 cases is also posing a threat to the market. 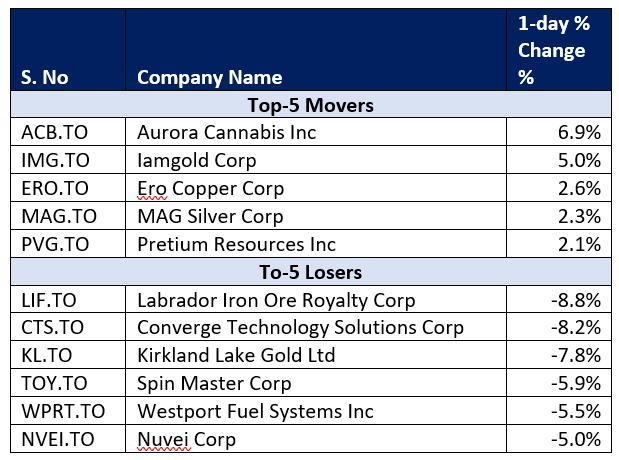 Bank of Nova Scotia (The), Bombardier Inc. Class B and Crescent Point Energy Corp. were the most active stocks from a volume standpoint.

Stocks fell significantly lower during trading on Tuesday, following a mixed performance the previous day. The Nasdaq along with the S&P 500 also plummeted to their lowest closes in one and two months, respectively, as a result of the sharp declines on the day.

The Conference Board unexpectedly issued a study showing a sustained drop in U.S. consumer confidence in September, adding to the gloomy feeling on Wall Street.

The U.S. Dollar index was strong against the basket of major currencies on September 28, and ended in the green at 93.71, growing 0.35 per cent.

The Canada 10-year bond yield also surged on Tuesday’s trade and closed in green at 1.500, appreciating 6.31 per cent.