William Ackman, one of the top American investors, announced to investors that he would be returning the US$ 4 billion he had raised in one of the largest-ever SPAC. Mr Ackman said he would return the money because he had been unable to identify a suitable target business to merge with and take public.

The outcome represents a significant defeat for the well-known hedge fund manager who had originally intended for the SPAC to acquire a share in Universal Music Group last year.

Mr Ackman listed several reasons that hindered his search for a suitable firm to merge his SPAC, including unfavourable market conditions and fierce competition from conventional initial public offerings (IPOs).

What has happened to the PSTH SPAC?

Pershing Square Tontine Holdings, Ltd., the special purpose acquisition company, completed an IPO and raised US$ 4 billion on the New York Stock Exchange in 2020. In the letter, the billionaire investor stated that he believed the COVID-19 pandemic would continue to disrupt capital markets, so PSTH was created.

The SPAC would return US$ 4 billion in trust to shareholders after two years because it cannot complete a deal that satisfies its investment criterion and feasibility parameters.

SPACs, commonly called blank-check businesses, are publicly traded cash shells established with the express goal of merging with a private company. The procedure makes the target firm public and is comparable to a reverse merger.

SPACs reached their pinnacle in 2020 and the beginning of 2021, helping several well-known SPAC developers to reap paper gains totalling hundreds of millions of dollars. 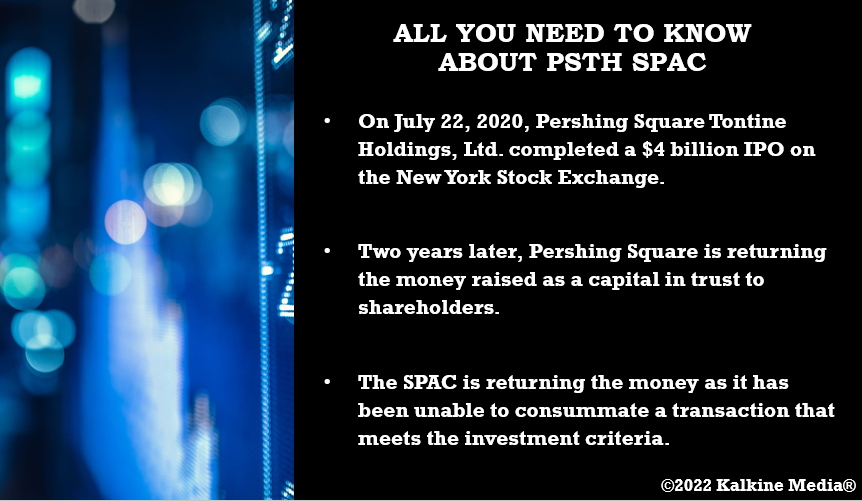 However, in 2022, private companies are avoiding blank-check mergers due to the underwhelming performance of the market.

Inflation continues to increase, and the central banks seem to have no choice other than rising the interest rates to control the rising prices of goods and services.

Due to such macroeconomic factors, the equities markets might continue to record major fluctuations caused by high volatility. It is highly unlikely that the private companies would consider going public at the moment.