MariaDB plans a public debut. How can you buy this stock?

MariaDB Corporation Ab, an open-source database software company, has expressed its intention to become a publicly-traded company. According to the company's statement, it will not go public through a traditional initial public offering (IPO) but merge with a blank-check company.

MariaDB is one of the leading database software companies in the world, and it appears that investors in North American markets are looking up the company's public debut plans.

The transaction is expected to give an enterprise value of around US$ 672 million to MariaDB. The SPAC merger provides the shareholders of Angel Pond with an opportunity to participate in the expected growth of a leading database software company.

At the end of the trading session on Tuesday, February 1, the POND stock was up 2.1 per cent and closed at US$ 9.85 per share. 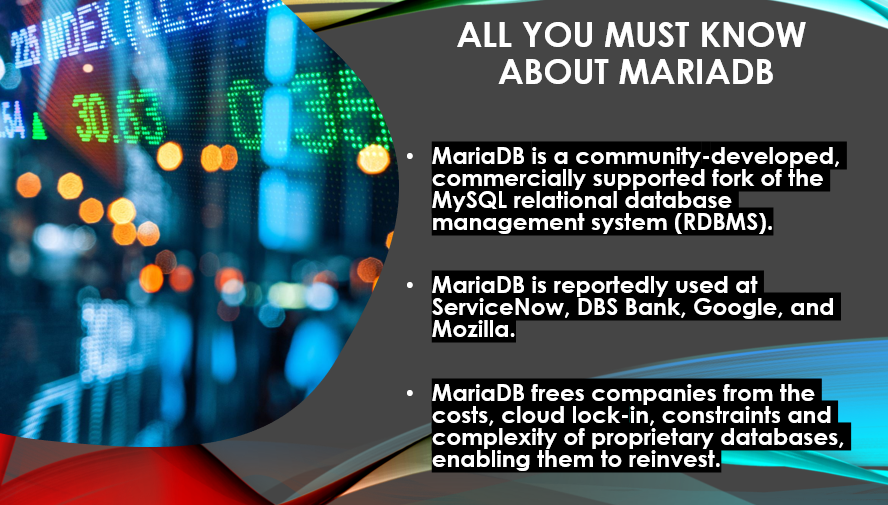 Angel Pond was created as a blank-check company, and its one of the co-founders is Theodore T. Wang, a former partner at Goldman Sachs. Another co-founder is Shihuang Xie, who was Alibaba's co-founder.

Once the SPAC merger closes, the combined entity will be called MariaDB plc, and it will be led by MariaDB's chief executive officer (CEO), Michael Howard.

The deal is expected to close in the second half of this year, and until then, the company will remain private and retail investors won't be able to buy MariaDB's stock.

According to the company statement, MariaDB has growth potential because it is an open-source database platform. An open-source community can drive viral adoption.

The cloud database-as-a-service (DBaaS) market is expected to register a compound annual growth rate (CAGR) of 27 per cent and reach US$ 33 billion by 2025.

The Board of Directors of both the companies have approve the transaction and it will be subjected to approval of shareholders of both MariaDB and Angel Pond.