What is NinjaFloki crypto & why has NJF coin rocketed to its ATH?

The NinjaFloki (NJF) cryptocurrency price has witnessed an unexpected price surge. In the last 24 hours, NinjaFloki crypto's price was up 98 per cent and trading at US$ 0.00008755 per token.

Launched in 2021, NinjaFloki cryptocurrency operates on the Binance Smart Chain and has a maximum supply of 100 billion NinjaFloki tokens.

According to CoinMarketCap data, the self-reported circulating supply of NinjaFloki coin is 80 billion. 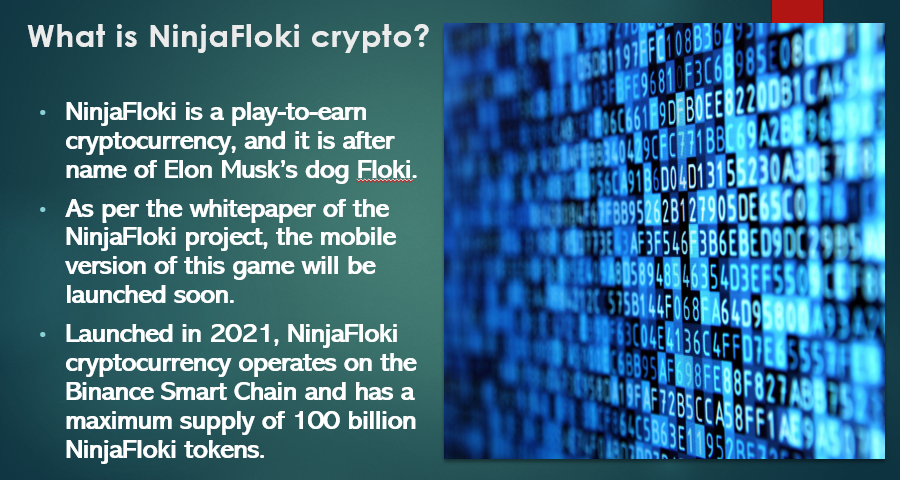 The NinjaFloki coin is a play-to-earn cryptocurrency and helps users generate passive income. Although it is not clear when the full version of the game will be available, users can play the demo version to understand it better.

As per the whitepaper of the NinjaFloki project, the mobile version of this game will be launched soon. It will be available on the Google play store and Apple store.

The project's website mentions tokenomics as three per cent of every transaction is meant for redistribution among holders of the NinjaFloki coin. Meanwhile, five per cent is for marketing, and one per cent is for liquidity.

In total, nine per cent fees are deducted on every sale and purchase of the NinjaFloki crypto.

Game development is ongoing, and the whitepaper mentions that holders can win tokens by playing games. Notably, the game comprises 50 chapters, and if users can finish all the chapters, they would get a big prize in the end.

When a user passes a level, tokens are allotted immediately. To play the final version of the game, users will be required to have NinjaFloki coins.

Also, anyone can create a BEP-20 token on the Binance Smart Chain, and as NinjaFloki is new, it is advisable to be cautious before investing.