What is Dallas Cowboys crypto? All you need to know

On Wednesday, April 13, it was announced that Dallas Cowboys and Blockchain.com have partnered. The announcement came from the football team's owner and general manager, Jerry Jones.

Some reports suggest that Peter Smith, who is the co-founder and chief executive officer of Blockchain.com was also present at the NFL team's headquarters. However, the price and deal length were not revealed due to the NFL rules.

What is the Dallas Cowboys crypto partnership?

The Dallas Cowboys has become the first NFL team to partner with a cryptocurrency platform. Blockchain.com will sponsor the football team, and the move comes after the league owners have decided to allow sponsorship deals with crypto companies.

According to reports, the fans won't be allowed to use cryptocurrencies at the NFL team's AT&T Stadium as of now. However, they will get a chance to win exclusive fan experiences.

Also Read: What is Spintop (SPIN) crypto and why is it soaring?

Notably, the AT&T stadium can hold 80,000 people, and a QR code will be attached to every seat that will link to the Dallas Cowboys' website and display Blockchain.com's wallet for spreading awareness about cryptocurrencies.

There are millions of Cowboys fans, and through this partnership, Blockchain.com could get a boost if it can add new users.

The crypto company could also explore working closely with the NFL to expand the use of virtual currencies in the stadium and online fan experiences. 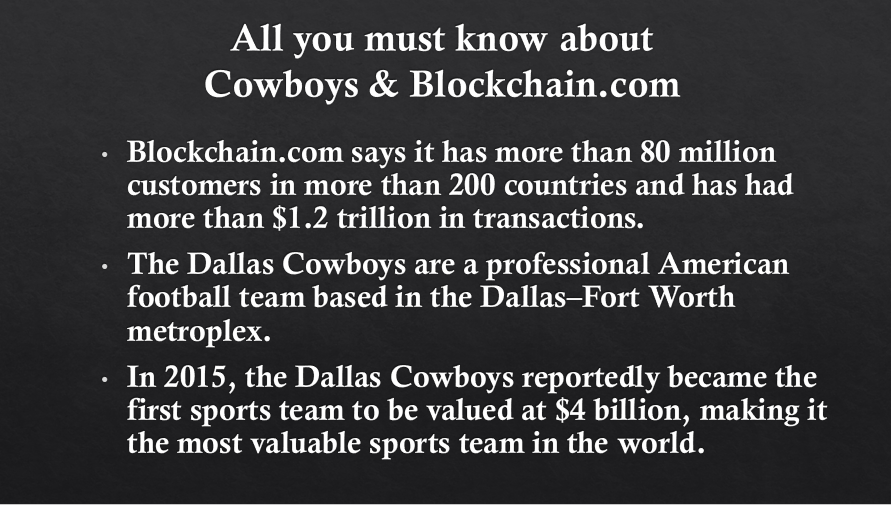 The partnership between sports organizations and crypto companies has increased rapidly. Last year, Crypto.com took over the naming rights of the Los Angeles Lakers' arena in a deal valued around US$ 700 million.

Also, the National Women's Soccer League had signed a deal with Voyager Digital, a cryptocurrency platform.

The partnership between Dallas Cowboys and Blockchain.com could lead to partnerships between other NFL teams and crypto companies. The NFL is among the most popular sports league worldwide, and crypto companies could take advantage of the viewership to get new users and spread awareness around cryptocurrencies.

Also Read: What is Celo crypto and why is its price skyrocketing?