The UK retail sales increased by 12 per cent in May, as per the data released by Office for National Statistics on 19th June 2020. The retail sales dipped by a record 18.1 per cent in the previous month (April 2020). The other vital factors that triggered the market were:

Given the developments in the market, we will discuss two FTSE All-Share listed stocks - Tyman PLC (LON: TYMN) and Galliford Try Holdings PLC (LON: GFRD). Both Companies operates in the construction and material sector. As on 19th June 2020, TYMN and GFRD were up by 1.45 per cent and 8.07 per cent, respectively (before the market close at 2.16 PM GMT+1). Let’s walk through their financial and operational performance.

Tyman PLC is a leading international provider of hardware solutions for doors & windows and commercial access solution for the roof, wall and the floor to the construction industry. Tyman’s headquarter is in London, UK. The Company has operating facilities in 18 countries worldwide and has over 480 patents.

For the period January to April 2020, the Group’s revenue declined by 12 per cent year on year. The revenue alone fell 39 per cent in April 2020 year on year. The stringent lockdown severely impacted the construction and renovation activity in Europe and the UK. In the US, its largest market, the demand remained subdued. The Group reopened its facility in Italy in mid-April, and the UK facility started in a phased manner in May. All the manufacturing facilities are operational in North America except for two facilities in Juarez, Mexico.

On 3rd April 2020, the Company withdrew payout of a proposed final dividend of 8.35 pence per share for FY19. It paid a lesser interim dividend in FY19. The Company will save GBP 16 million in H1 FY20 by cancelling the final dividend payment.

As on 30th April 2020, the Group had a cash balance of GBP 132 million with an undrawn credit facility of GBP 13 million from its GBP 240 million revolving credit facility. The Group is monitoring its cash flow very carefully. The net debt excluding leases was GBP 172 million. The nearest repayment is scheduled in November 2021, the US private placement of USD 55 million.

It has three divisions, AmesburyTruth in North America, ERA in the UK and Ireland and SchlegelGiesse in Continental Europe and Rest of the world. In FY19, AmesburyTruth generated revenue of GBP 388.3 million whereas ERA and SchlegelGiesse added GBP 107.5 million and GBP 122.8 million, respectively, to the Group revenue, which was GBP 618.6 million. 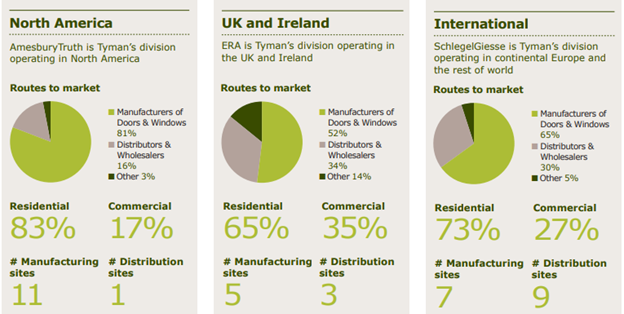 Like for like revenue declined 1.8 per cent year on year due to softness in demand in the North American market, adjusted operating margin declined by 40 basis points to 13.7 per cent in FY19 due to operational disruption. Leverage decreased to 1.72x in FY19 from 1.96x in FY18 due to significant acquisition and stable cash conversion. The ROCE was 12.0 per cent down by 60 basis points compared to the previous year.

The Group withdrew its future guidance amid the current uncertainty, and it will decide on the next dividend payment when the situation normalizes. It is also carefully monitoring its working capital and future capital expenditure. It is also in the process of recruiting a new chairperson of the Board. It believes to be well prepared even in the prolonged period of uncertainty. The Company is utilizing government schemes such as employee retention and tax relief wherever available. It will release new products in 2020 and focus on their timely delivery.

Galliford Try Holdings PLC is a UK based construction company. Galliford Try is operating under three segments, namely Building, Infrastructure and PPP investment. The business caters public and commercial clients with target clients in Education, Defense and Health sectors, Infrastructure focusses on the development of Highways and Environment projects and PPP delivers buildings and infrastructure projects under the public-private partnership.

As reported on 12th March 2020, the final account of Aberdeen Western Peripheral Route was settled, and the Group received a cash payment of GBP 32 million.

30th April 2020: YORbuild Major Works Contractors Framework Agreement appointed the Company on Lots 1 and 2 of the Framework. The structure will be for four years and will comprise general building works. At Lot 1, building work will be between GBP 10-30 million and Lot 2 the work is above GBP 30 million.

Public and regulated sectors make 83 per cent of the order book. The Company expects average cash in H2 FY20 to be above GBP 100 million. The Group holds a PPP portfolio of GBP 39 million. It has cancelled the proposed interim dividend of 1.0 pence per share for H1 FY20.

The Company abstained from guiding for H2 FY20 and FY21. The impact on its supply chain and scale of disruption is not yet quantified. The significant portion of the order book is from the government sector, and hence, it is believed to be secured. It will take all the necessary steps to support economic recovery by cutting capital expenditure and managing working capital. The focus will remain on timely project delivery to increase margins. The new contract wins will be vital for future growth.