Being a minerals exploration and development company; Renegade Exploration Limited (ASX:RNX) has been predominantly engaged in undertaking mineral exploration activities. These activities are undertaken across its presently held Yandal East Gold Project in Western Australia and Yukon Base Metals Project in Canada.

The Company strategises to rapidly evolve as a mid-tier resource company that can deliver long-term shareholder value.

RNX has been working against the clock and has reported material progress across its project portfolio through continued exploration at the Yandal East Gold Project and the Yukon Base Metal Project.

Subsequent to securing the option to acquire 75% of the Yandal East Gold Project, RNX initiated exploration activities across the tenement area, wherein it conducted several desktop works before undertaking an extensive gravity survey across the project.

Yandal Greenstone Belt, Western Australia a well-endowed gold region is where Yandal East is located. Project can be approached through Country roads, which are well- maintained, leading to Millrose Station Homestead and then through within project station tracks.

Opportunistically, the Yandal East Project comprises of various advanced prospects, out of which the Ward Prospect is the most advanced. Aircore drilling at several holes returned thick, significant mineralisation, including the following best intercepts: 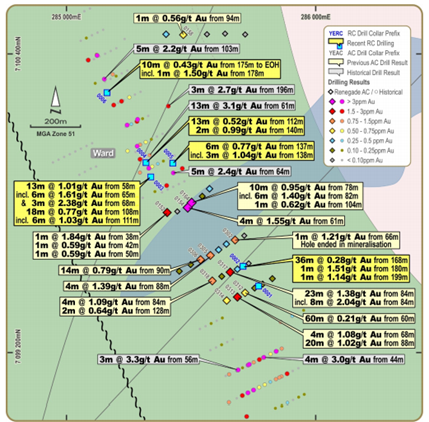 More recently undertaken RC drilling over six holes at the Ward prospect for 1,087m in September 2020 returned the following intercepts:

Moving ahead; a detailed gravity to be conducted across the tenement package should be around the corner as it was scheduled to start in late September. This is aimed to undertake a follow-up drilling based upon projected targets generated by this work.

Furthermore, the next program is expected to be undertaken on 400m x 100m spacings and is anticipated to offer better clarity on present targets as well as their structures and generate fresh targets at the area.

Update at the Yukon Base Metal Project, Canada

RNX secured the option to acquire 90% interest in the Yukon Base Metal Project and exercised this option in July 2007 after receiving positive results from additional exploration.

Since then, RNX for increasing the resource base have been aggressively undertaking activities at the project and has discovered the potential at the Yukon Project. Presently, mineralisation across several deposits including Andrew, Darcy and Darin deposits remains open depth and along strike. 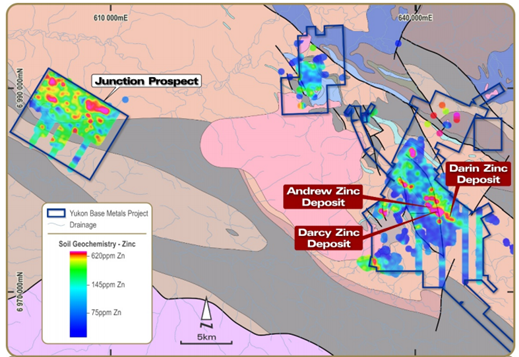 Opportunistically, RNX has discovered evidence to several large, undrilled, consistent soil geochemistry anomalies at the project, comprising at the Junction prospect area where extensive soil anomalies have been defined.

RNX remains optimistic that additional drilling shall result in further resources at the project.

The action plan of RNX in due course comprises of continued exploration activities at both the projects and looks forward to considering development and other strategic options for the Yukon Project.

Furthermore, the Company plans to pursue the acquisition of further projects that are in sync with the existing asset portfolio of RNX.

Interestingly, RNX shall also progressively meet its obligations pertaining to exploration tenements and undertake activities related to further exploration permits and development of the project. On the cash management front, RNX plans to optimally manage the cash available and benefit from capturing opportunities for adding value to the business.