Diversified explorer pursuing major opportunities across the Northern Territory and Queensland, Eclipse Metals Limited (ASX:EPM) has announced the discovery of shallow manganese mineralisation at the Amamoor prospect in the Mary Valley Manganese Project. 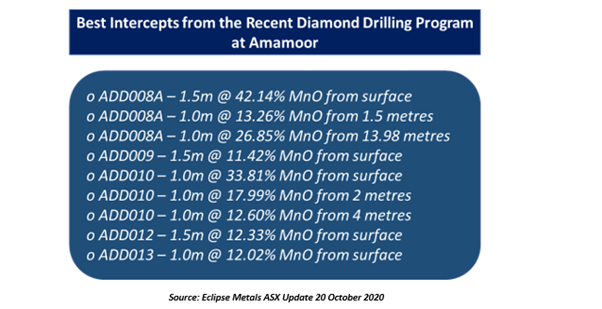 The next phase of the exploration program will include a bulk sampling of manganese mineralisation from the Central area of old mine workings for beneficiation and metallurgical testwork.

The Central area is the most readily sampled region with exposed working faces and near-surface massive and disseminated manganese mineralisation intersected by the drill holes ADD006, ADD007 and most recently ADD008A.

Manganese mineralisation is substantially denser in comparison to its enclosed rock formations which can be easily sorted by gravity and magnetic beneficiation processes to produce a high-quality saleable product.

The manganese ores can be processed by applying fundamental, non-chemical processes such as crushing, wet scrubbing, heavy-media gravity separation, magnetic separation depending on the type of the ore and/or ore sorting techniques to produce a high-purity high-grade concentrate.

The mill head grade of the raw ore feed may range between 7 and 10% MnO but may be upgraded to 35 to 40% MnO using proper beneficiation processes as mentioned above, producing a high-quality commercial product. 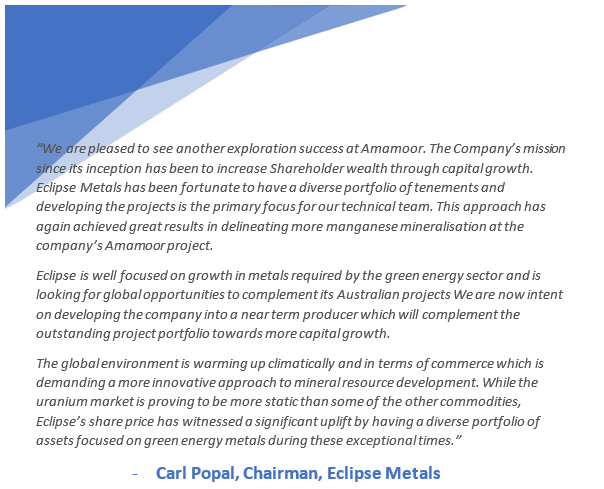 The ability to upgrade manganese ore facilitates the adoption of large-scale mining procedures instead of selective mining techniques which restrict the potential of the mineable resource and the objective of Eclipse Metals.

The company plans an extensive evaluation program to assess all historical and recent drill intercepts, geological environment and structure, high-order mineralisation and beneficiation potential in the upcoming weeks together with the bulk sampling program.