The recently concluded drilling campaign tested for extending the historically drilled high-grade manganese mineralisation along the strike length of 160 metres at a down dip to 20 metres. During the diamond drilling program, a total of six holes were completed over 97.6 metres.

All holes were initially planned to be drilled to a final depth of 20 metres, but a few of the holes were terminated at shallower depths due to difficult ground conditions.

Half of the coring samples from the prospective and mineralised area from the diamond drill holes have been collected and sent to a laboratory for assaying. The assay results are expected to be released in due course. The mineralised intervals will be assayed on a per metre basis to extensively assess the distribution and strength of the manganese mineralisation. 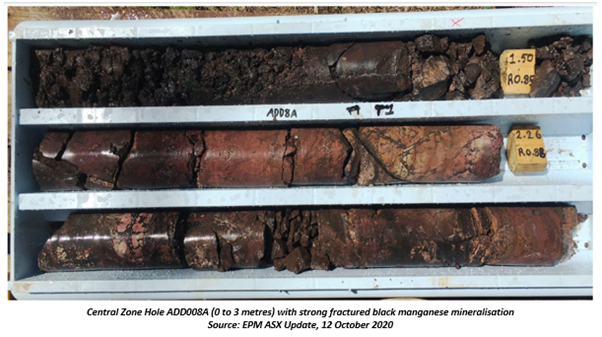 Next Leg of Growth: Exploration and Assessment Programs Under Planning

Following the 2018 drilling program, the recent drilling campaign focussed on the testing of extensions of the already identified mineralisation. Eclipse’s board is pleased with the successful completion of the diamond drilling program at the Amamoor deposit.

Following the successful execution of the drilling campaign, the company would require ground access to effectively explore and evaluate the economic potential of the Amamoor manganese deposits.

Numerous historical mine workings in the vicinity are yet to be tested, and the production of large samples would be required for potential customers. Further planning for ground access, definitive geophysical surveys, drilling and bulk sampling program is already underway.