Junior aggressive mineral explorer, Krakatoa Resources Limited (ASX:KTA) has reached another milestone where it has just been granted EL 9000, the Rand Project. EL 9000 now replaces the earlier direct licence applications including ELA5982, ELA5985 ELA6012 and ELA6013 that was announced on 6 July 2020.

Although the geological atmosphere at Rand is noticeably newer than the Central Pilbara, it reflects several similarities with Mallina Gold Project (comprising the magnificent Hemi gold deposit) of De Grey Mining (ASX:DEG). On ASX the Share Price has started to react, up ~11% in 2 days and is trading at $0.086 on 8 October 2020.

Location and Mineralisation of the Rand Project

The Rand Project now covers an area of 580km2 and is located ~ 60km to the north-west of Albury in Southern New South Wales. It is located between two regional shear systems in the Central Lachlan Fold Belt. These shear zones include the north-trending Kiewa shear zone to the east and the NW-trending Kancoona shear zone (located near Coreen) in the west.

Did you read: Krakatoa Cracking Crust in Drilling Quest as it Goes for Gold in the Lachlan Fold

The Rand Gold Project captures the historical Bulgandra Goldfield, which indicates the prospective nature of the Project for shear-hosted and intrusion-hosted gold.

Reported production from the main historical workings within the Bulgandra camp include the following:

Moreover, the known workings occur in small windows of extensively leached bedrock and deeply weathered through the inconsistently thick blanket of latest sediments. 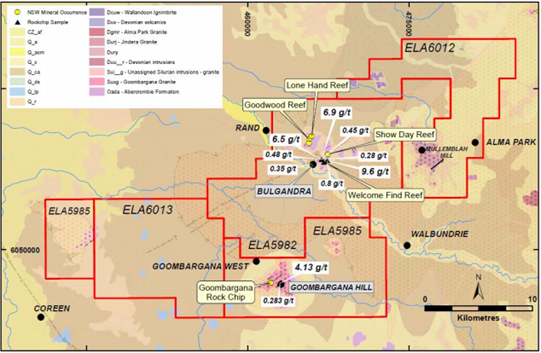 Past exploration at the Project concluded in the 1980s and was restricted to the Welcome Find and Show Day Reefs. The results from this exploration validated the leaching of gold from within the upper saprolite. Encouragingly, this work indicates that drilling was not carried out to significant depths.

Since then, the Project area remains unexplored since the closure of the Goodwood and Lone Hand Reefs prior to 1902.

Interesting Read: Krakatoa Kraks On Hammer & Tong as it Goes for Gold in the Lachlan Fold

Potential of the Project and Upcoming Activities

Overall, KTA has concluded that the entire Bulgandra Goldfields are largely untested and unexplored.

KTA is optimistic that the Rand Project indicates additional non-dilutive growth in the Company. This acquisition represents a major win for shareholders, and the Company plans to discover the true potential of the freshly granted Project.

KTA looks forward to immediately commencing the exploration work, which shall include the following:

Interesting Read: Is KTA next to fire with Copper & Gold in the Lachlan Fold? Shallow Gold intercepts discovered

As announced by KTA, the high-resolution magnetic survey will explore for Hemi-style signatures and build a pipeline of drilling targets.

What is Seashell crypto & why this fintech is making waves ?