Tech-based, vertically integrated social commerce business Crowd Media Holdings Limited (ASX:CM8) has achieved all of above milestones in the past few months, primarily driven by management focus on quality of revenue, cost efficiency, and agility from top to bottom.  The Company, as Chairman Steven Schapera opines, is more active, capable and efficient despite operational upon a lower cost base.

Below are few recent accomplishments of the Company- 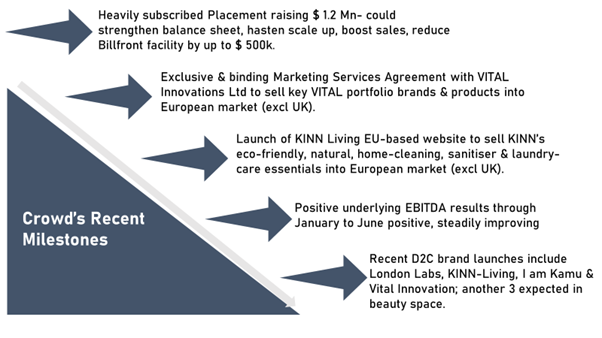 As Mr Schapera states, Crowd is led by a Board of seasoned entrepreneurs, always assessing risk, especially in the short and medium term. An example of the same has been identification of risk of Billfront debt facility, where it makes sense to reduce exposure by about $ 500k, to a more comfortable level of around $ 1.65 million outstanding.

Crowd has evolved into a lithe, lean, and nimble business run by entrepreneurs, not corporate managers. On this note, let us acquaint ourselves to the Company’s Board of Management, that has played an instrumental role in taking Crowd to a reasonable position to assess where it has been, where it currently is, and where it is headed-

With deep experience of over three decades across agricultural, wine, and cosmetics industries, Mr Schapera serves on several Boards including ASX-listed OBJ Ltd, Berlin-based Invincible Brands GmbH., and UK-based Wild Nutrition Ltd. He co-founded BECCA Cosmetics in 2001 and sold to Estee Lauder in 2016.

Mr Palermo has an experience of over two decades in public practice and is an expert in strategic business management as well as corporate transaction execution. Besides his role in Crowd, he is Deputy Chair of Royal Perth Hospital Research and serves as Director of Alterra Limited, Chartered Accountants Australia and New Zealand.

In the latest situational update, Mr Schapera acknowledged and thanked Mr Palermo for the significant value he adds in Crowd’s growth.

Mr Quandt worked for a decade as a consultant for Booz & Company where he catered to many large corporate clients on strategy, operation and organisation. He has worked as Strategy Lead for Linde AG for the € 6 billion Americas business. Recently, Mr Quandt was COO/CFO and Board Director of Invincible Brands.

In the latest situational update, Mr Schapera acknowledged and thanked Mr Quandt for the significant value he adds in Crowd’s growth.

Mr Carosa has more than two decades worth of experience in business and technology. He is renowned as a leader in the Internet space. He led the internet space by building Australia’s largest MP3 digital music service in the late 90’s and the country's second largest virtual web hosting company. He sold this company in 2006 operating the largest independent media & entertainment company with revenues of over $100 Million. Mr Schapera recently mentioned that Crowd’s Board could not have achieved what it has achieved in the last nine months without absolute support from Mr Carosa and his Management Team.

Serving as Crowd’s CFO since just over a year (June 2019), Ms Mouldenhauer is a Certified Public Accountant. She has more than a decade’s worth of experience in the field of accounting and financial planning. Ms Mouldenhauer has held a number of senior roles at at KPMG in the audit division and Rabobank in the Netherlands and the US, prior to her association with Crowd.

As Crowd continues to work on its mission to sell exemplary products that are integral to the lives of its millennial audience, the management is also focused to see the Company bolster revenues in the health/wellness space.