Will Lady Agnes prove to be a game-changer for Renegade Resources (ASX:RNX)?

Last year in December 2022 Renegade Exploration Limited (ASX:RNX) executed an option agreement with Burke copper to pick up around 75% interest in the North Isa Project joint venture (JV) in Queensland. The company is now making giant strides in its JV project.

Renegade recently completed an RC drilling program over Lady Agnes to test the extent of copper oxidation and the historical induced polarisation (IP) anomaly on the prospect area. A total of 1,234m were drilled to test oxide and sulphide target zones over the prospect.

The sampling program at Lady Agnes led to the delineation of a 100m copper strike . The drill targets were identified during these field programs.

The location of Lady Agnes augurs well for exploration. It is situated at a flexure in the Paroo thrust. The thrust separates the Basement Eastern Creek Volcanics and the sediments of Mt Isa Group. The geology of the region exhibits extensive brecciation, silicification and presence of visible malachite mineralisation. The North Isa Project runs around ~20km in the Western Fault.

LAG1, a historical diamond drill hole on the prospect, commences from 273m and hit a broad zone of copper mineralisation within a breccia style structure. The findings of the sampling program are in line with the historical data and on back of that the Board approved a follow-up drilling campaign on the prospect.

The geology team has also identified a distinct correlation between high-grade copper findings and higher-grade gold values from the assay results. 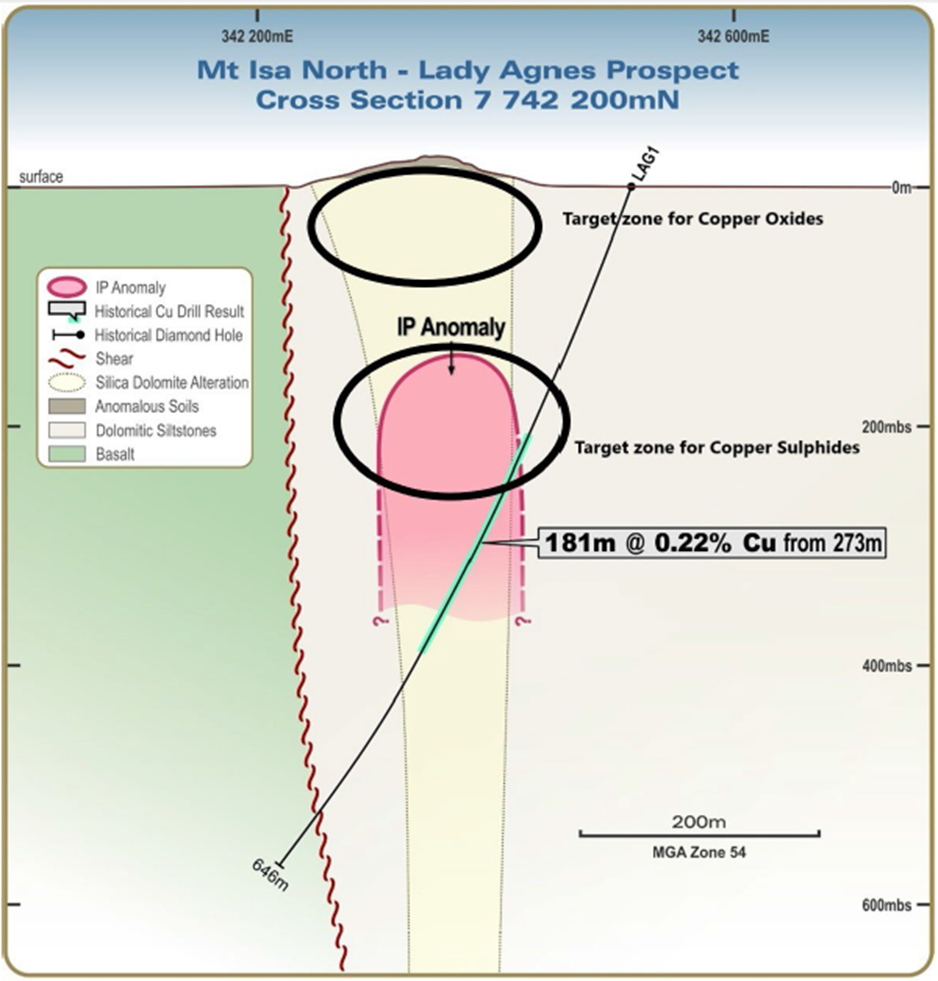 RNX continues its exploration activities on the project. Lady Agnes, Pipeline and Tulloch prospects are also being explored.

The drilling program was aimed to test the structures under Lady Agnes Copper Mine and follow up the legacy work. Historical mining was centred around the higher-grade oxide resources. The results of the geological and geophysical interpretation indicate the presence of potential copper sulphide mineralisation hosted within the main alteration zone, which exhibits a significant IP anomaly.

The findings of the exploration and drilling operations could change the potential financial metrics of the project significantly. The presence of gold opens up a new potential revenue stream. The location of Lady Agnes close to the Mt Isa infrastructure adds more value to the project as any future mining operation could create additional value for shareholders.

The Company is planning two geophysical survey operations over Lady Agnes in its next leg of exploration activities. EM survey on one of the holes LARC22-02 and gravity survey over the Lady Agnes and Tulloch prospects are in the pipeline.