A 23-hole reverse circulation (RC) drilling campaign for a total advance of 2,754m has been concluded. The drilling campaign aimed to test Magnetic Metals Ions (MMI) surface gold geochemistry anomalies. Assay results for two holes have been received. Grades up to 10.40 g/t gold have been intersected.

Drill hole YBRC059 along with the previous drilling intercept in YBRC053 (8m @1.43g/t Au), indicated that gold mineralisation is contained within another major structure west of and parallel to the Yidby Road gold mineralisation, also known as the “Central Zone”.

The “Western Zone” lies 400m to the N-W of the Yidby gold deposit, substantially enhancing the gold footprint at the project. Significantly, the gold trend showcases large widths with stronger gold mineralisation within a halo. 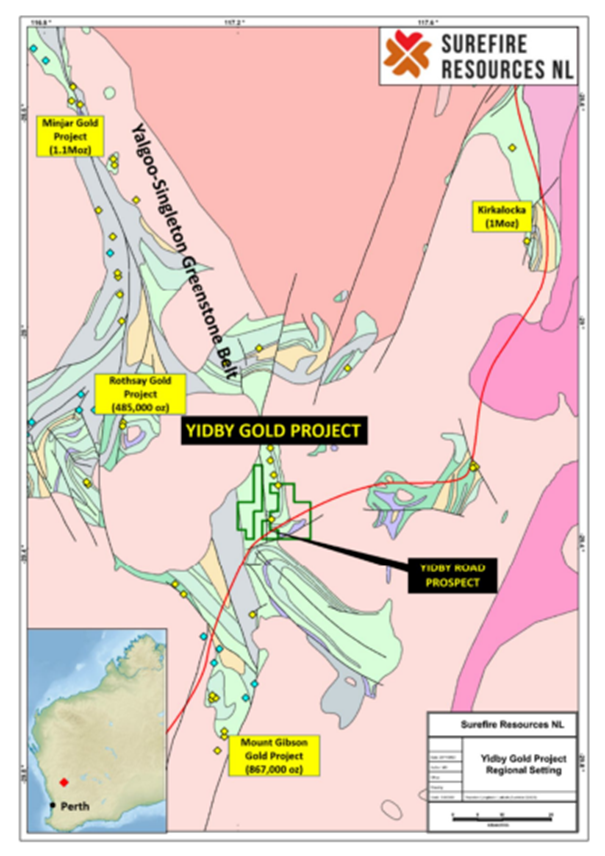 High grade gold results have been recorded in the intrafolial quartz veins. The Central Zone is believed to be parallel and identical to the Yidby Road Gold mineralised structure, 120m to the east. Currently, the Central Zone is recognised within YBRC059 and previously reported hole YBRC053 (8m @ 1.43g/t Au from 17m). The gold mineralisation is interpreted to remain open to the south.

Surefire is anticipated to receive the pending assay results of drilling samples in the upcoming six weeks.

Diamond drilling on the cards

Surefire plans to undertake six oriented diamond drill holes over 800m of HQ core. The drilling is likely to commence in the next 4 weeks at the Yidby Gold Project. The oriented diamond drilling will share invaluable data, re-alteration assemblages and structure that are necessary for a gold deposit with no outcropping mineralisation like Yidby. Therefore, Surefire considers Yidby as a blind gold discovery that is buried beneath 10 to 20m of transported overburden.