Indonesian gold explorer and developer Sihayo Gold Limited (ASX:SIH) has embarked on an ambitious exploration journey to unlock the gold potential of the North Sumatra region. The Company has drilled several holes at the Sihayo-2 prospect to evaluate the potential for extensions to the existing resource at the Sihayo Starter Project.

Sihayo has developed a three-tier exploration strategy to uncover the project’s gold potential. The main components of the strategy are:

In line with the above strategy, Sihayo has commenced a 30-hole drilling campaign at the Sihayo-2 prospect. Sihayo-2 lies in close proximity to the proposed Sihayo processing plant.

Sihayo-2 is located on the open northwest strike projection of the Sihayo gold belt. Situated at a distance of 500m-1,000m from the Sihayo-1 deposit, the Sihayo-2 target hosts a strong concentration of jasperoid boulders and outcrops located along a narrow NW-SE oriented ridgeline. 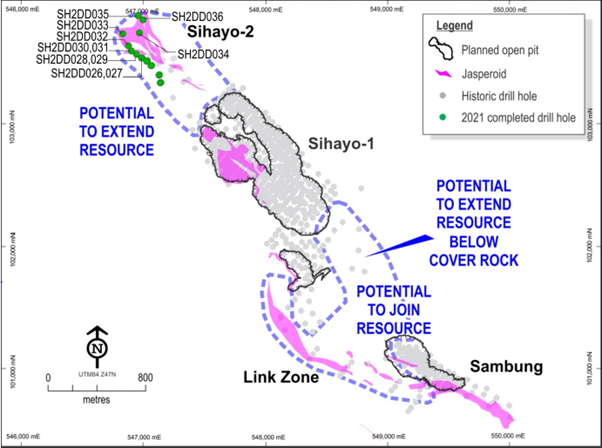 Sihayo commenced drilling at Sihayo-2 in mid-March of this calendar year. The campaign was planned for diamond coring in 30 holes with a total depth of approximately 3,000m. The objective was to test additional gold resources and provide geotechnical data for mine planning.

As per the 13 July update, Sihayo has completed drilling of 20 holes for 1,883m during the ongoing campaign. Twelve of these holes have been split and sampled for assaying. 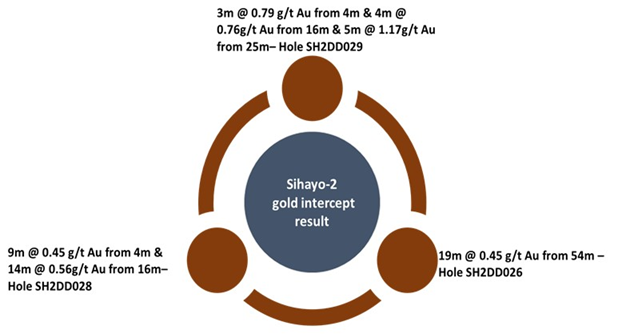 Significance of the assay result

The results indicate a potential for additional low strip ratio gold mineralisation located in the close vicinity of the proposed Sihayo plant site. The data indicates that mineralisation at Sihayo-2 occurs over some 250m of strike length and has up to 10-15m true thickness along the ridgeline on the western side of the prospect.

Jasperoid boulders and possible outcrops are located along the adjacent valley designated for the proposed waste dump. The current drilling campaign will test the area for gold-jasperoid mineralisation.

“The results are in line with our aims for the Sihayo-2 exploration program and support the presence of near surface mineralisation located close to the existing Sihayo Starter Project Resource. Further investigations are underway to assess whether the occurrence is potentially economic as early mill feed.”

Further, concurrent with the drilling campaign at Sihayo-2, a geotechnical and hydrogeological drilling program is in progress to support the optimisation and design work for the Sihayo Starter Project.

Drilling has also commenced on the Penatapan prospect at Hutabargot Julu, with first results expected towards the end of the month.