During the historical drilling programs, the intersections suggest that the area is highly mineralised with mineral assemblages similar to prominent mineral deposits of the Ordovician Lachlan Fold Belt. 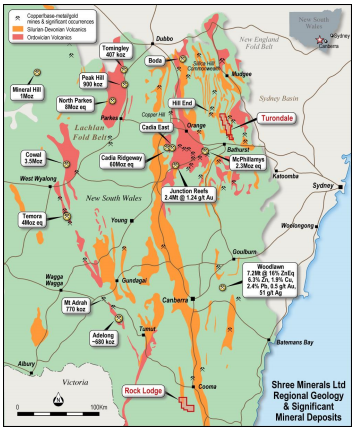 Previous exploration programs at Rock Lodge – So far, the prospect has been explored by only two companies in the past five decades. Although, the drilling programs in the past advanced to RC and diamond drilling, they could not be followed up. Further, the targets from the previous geochemical and geophysical surveys – including the Monaro Prospect and the Bobundara Gold Mine – were not tested.

The rock chip sampling programs on the quartz vein outcrops were conducted by Southern Gold NL and returned grades up to 11.1 g/t gold. Further, the diamond drilling in 1985 recorded intercepts up to 8m in length and grades up to 4.28g/t Au, 35g/t Ag, 0.79% Cu and 13.5% Zinc.

Desktop study – Shree has revealed two untested very strong IP anomalies at the prospect. Each of these anomalies is over 350m long.

Some of the mines outside Australia host greater than 3 million ounces of gold including the high grade Pogo project (9.98 Mt at 17.8 g/t Au).

Geophysical Surveys: SHH is considering the proposal to conduct an extensive aerial magnetic survey as these surveys are usually related to aeromagnetic anomalies. The Induced polarisation (IP) surveys will also be considered to delineate drill targets.

Soil and Rock Sampling: SHH has planned to conduct a soil sampling program in areas with outcroppings. A close spaced grid sampling (200m x 50m) will be conducted using a hand-held auger along with rock chip sampling to collect samples of ironstones, gossans and quartz veins.

Stream Sediment Sampling: The explorer has planned stream sediment sampling over areas with potential to host Ordovician age rocks. The density of the samples has been increased in the vicinity of the mineralised areas at Rock Lodge, Mount Pleasant Creek, Bobundara Gold Mine and Monaro Prospects.

Drilling: The drilling program will test the targets generated by the geophysical and geochemical sampling.