The drillhole 21MORC232 at a new target has returned new high-grade result and has potentially identified two new lodes in close proximity to Break of Day deposit. The recent drilling outcomes are in line with the Company’s view that a lot more gold can be found at Cue.

A regional RC drilling program for testing further high-grade ‘Starlight’-type analogue lodes was completed across 12 separate targets. The Company has intersected four potentially significant, new zones of interest which may represent new lodes. Musgrave highlighted that all potential lodes have been subject to very limited drill testing so far and remain open. 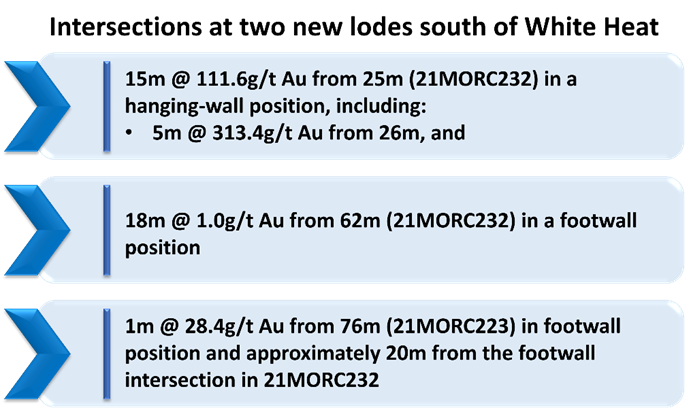 Another potential new zone with two separate mineralised lodes was intersected from drilling undertaken 250m north of Break of Day. The only hole (21MORC318) which currently tested this position remains open to the east, west and down dip. The Company plans to kick off follow-up RC drilling on both new target areas next week. Drilling returned:

RC drilling at White Heat has returned further gold intersections down plunge and along strike of the previous mineralisation.

What’s next at Musgrave’s gold assets?

Big Sky prospect- Infill resource definition RC drilling is continuing at the Big Sky prospect, with further assay results expected in December. Diamond drilling is planned to begin next week which is expected to underpin a maiden Mineral Resource estimate in the second quarter of 2022.

Target 14- Assay results from RC drilling at the target are anticipated in late December.

Musgrave has kicked off RC pre-collars for resource conversion diamond drilling at Break of Day and Lena while diamond tails would be completed in 2022. Moreover, a regional aircore program is planned to commence next week for testing the southern extension of the prospective West Island dolerite identified on the EVN JV to the north.

The Company is currently advancing work to progress the prefeasibility (PFS) level studies at Break of Day and Lena. The ongoing development in this context includes mining studies, environmental monitoring and assessments, metallurgical, processing, design and geotechnical test work.