Effectively steering its initiatives, the Company has announced the completion of the acquisition of the Xanadu Gold Project following the allotment of ~12.73 million fully paid ordinary shares as consideration. 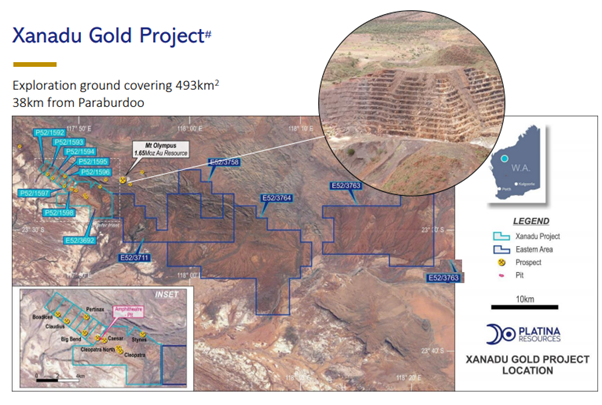 Located in the Ashburton Basin, Xanadu lies 38 kilometres southeast of Paraburdoo and 95 kilometres south of Tom Price. In what would mark a strategic stride for PGM, the completion of the acquisition process would kick off the exploration phase at the Xanadu Gold Project.

The recently acquired project has immense potential for favourable exploration outcomes, as a systematic exploration campaign has never been undertaken to follow up on several economic-grade gold drill intercepts of significant width.

The Xanadu Project has an extensive alteration system, which is hosted within sediments and carbonates considered prospective for intrusion-related gold mineralisation such as the Hemi discovery of De Grey Mining Limited (ASX:DEG) and the Telfer Gold Mine of Newcrest Mining Limited (ASX:NCM).

The significant upside of Xanadu can be attributed to several factors. The project, which has a favourable regional-scale structural setting, is located 7 kilometres to the east of the multi-million-ounce Mt Olympus gold deposit. Furthermore, a large and intense hydrothermal alteration system, extending for a strike extent of more than 10 kilometres, hosts widespread gold mineralisation.

The project’s host lithology also includes a highly reactive rock called the Duck Creek Dolomite, which is considered a favourable host to the target intrusion-related and Carlin styles of gold mineralisation.

At the project, immediate targets from the surface and at depth are present within the interpreted east plunging alteration system.

The Company’s exploration strategy will initially cover low-cost geophysics and geochemistry for building a deeper knowledge of the Xanadu project’s geological potential. It would also define both shallow and deeper targets for drilling.

Platina believes in the significant potential to develop upon the known oxide mineralisation. From a long-term perspective, the Company plans to target primary mineralisation present within the alteration core of the system, which has never been subject to drill testing in the historical programs.

ALSO READ: Platina Resources Sitting On A Goldmine Of Opportunities in Western Australia