Musgrave Minerals Limited (ASX: MGV) on Monday surged around 9% on the ASX in intraday trade after the Company reported further sets of impressive results at the Big Sky prospect, along the new 7km long gold corridor southwest of Lena at its flagship Cue Gold Project. Significantly, the regolith drilling program has doubled the gold anomalism at Big Sky prospect to over 2.6km of strike, where mineralisation opens to north and south.

Commenting on the latest high-grade results, Musgrave Managing Director Rob Waugh highlighted that the grade, extent as well as strong continuity of the Big Sky regolith mineralisation signify its potential to host a substantial mineralised system.

Mineral Resource extension on the cards for Big Sky Prospect?

The Big Sky Prospect is situated roughly 3.5km south of Break of Day, with the mineralisation remaining open to the north and south, where the Company has planned further drilling. The gold explorer has advised potential for two parallel zones of basement gold mineralisation at the prospect. MGV has assessed 6m composite samples from AC drill holes at Big Sky, and here are some crucial new intersections: 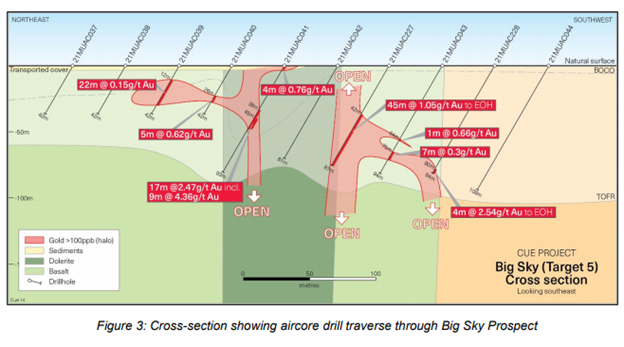 Aircore drill holes are spaced 40 metres apart along traverse lines, which are 160-320 metres apart. The extensive nature and continuity of the gold mineralisation at the Big Sky Prospect bolster its potential to increase the existing resource base.

Meanwhile, Musgrave has also kicked off an extensive 10,000m follow-up RC drilling program for testing the continuity, grade, and down-dip extent of the mineralisation in the fresh basement rock. So far, 26 holes have been drilled, with assays pending. Musgrave indicated that the success of the follow-up RC drilling program would warrant resource definition drilling. 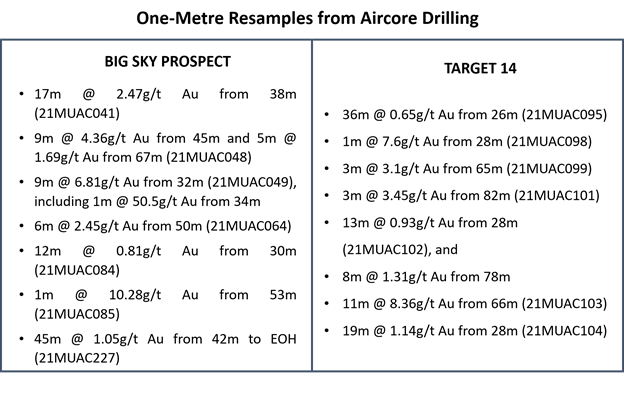 Road Ahead for Musgrave Minerals

At its 100% owned tenements, Musgrave is anticipating one-metre resamples in June from six-metre composite samples of ~40 regional AC drill holes drilled at Big Sky and Target 14.

Assays for the ongoing RC drilling at the White Heat and Numbers prospects are anticipated in late May.

Musgrave has kicked off follow-up RC drilling, which is focused on defining the basement source of gold anomalism at the new Big Sky target.

The Company has also commenced Follow-up RC drilling at Target 14, geared towards defining the basement source of gold anomalism. Initial results are expected in June.

Works are continuing to advance the pre-feasibility study at Break of Day and Lena, with further diamond drilling for metallurgical testing in progress.

The diamond drilling program consisting of seven drill holes have been completed on Lake Austin, with assay results anticipated in June. The program was focused on following up the extensive regolith gold anomalies identified in the regional aircore drilling program.