Commenting on the recent results, Musgrave Managing Director Rob Waugh said that the results are very encouraging and highlights the potential for high-grade at Big Sky prospect over the broader 2.6km of strike. He indicated that such coarse gold in reverse circulation is unusual on the Yilgarn

He also added, “We are drilling full steam ahead to deliver a maiden resource for Big Sky in Q2 2022. It’s an exciting area and we look forward to updating the market with further results as assays are received.”

The focus of the ongoing infill resource definition RC drilling is to test grade, continuity and down dip extent of the Big Sky mineralisation in weathered and fresh basement rock.

In addition to the Bonanza grade intersection at the Big Sky prospect, the drilling also intersected several other high-grade intercepts.

Further infill drilling is currently being planned around the bonanza gold result in the drillhole 21MORC277. One-metre re-samples of previously reported 6m composites from 39 RC drill holes at the Big Sky have confirmed the results from the 6m composite sampling. 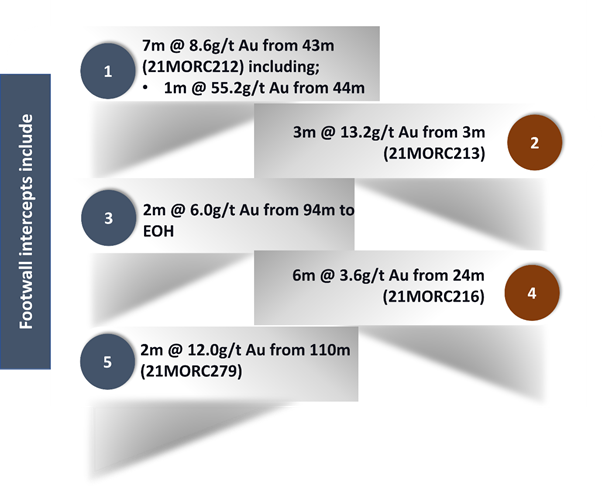 Musgrave is planning a 9,000m aircore drilling program to test the new mineralised target zone over an extended strike extent of over 5km.

How is exploration advancing on Lake Austin?

Follow-up diamond drilling is underway on Lake Austin to test the basement beneath the new regolith gold mineralisation which were recently identified in aircore drilling at West Island. Meanwhile, the Company is awaiting further assay results for diamond drill holes at West Island.

The current aircore drilling program on Lake Austin is slated to conclude in late November, with assay results waited for additional 100 AC holes in the current program.