Musgrave Minerals Limited (ASX: MGV) continues to undergo a slew of developments at it its wholly owned tenure at Cue gold project, with the first quarter of 2021 brimming with exploration success. As highlighted by the company’s quarterly report for the period ended 31 March 2021, Musgrave’s key focus, during the period, was on an extensive regional aircore drilling program for testing new targets.

The regional drilling completed 255 holes for 17,644 metres and identified anomalous gold in the regolith to define a new gold corridor parallel to, and west of Lena. The initial follow-up RC drilling program including 49 drill holes for 5,149 metres intersected high-grade gold at the White Heat, Target 14 and Big Sky prospects. All the three targets are typically characterised by near surface gold results.

During the quarter, Musgrave kicked off a 7-hole diamond drilling program at Lake Austin of the Evolution JV. Also, the explorer initiated prefeasibility level studies over Break of Day and Lena deposits.

White Heat (previously known as Target 2) lies 300m south of Break of Day and has strike extent of around 70-100 metres open down plunge. During the quarter, the Company received high-grade assay results at the deposit. 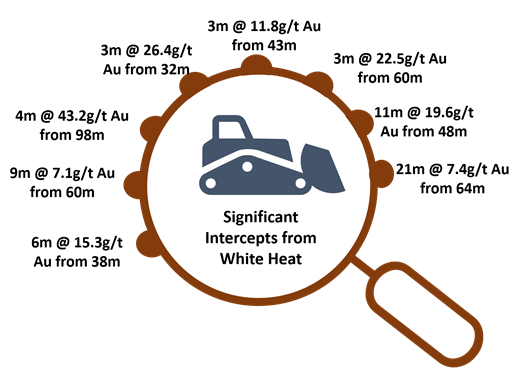 A continuous gold mineralisation, identified at Target 5 and Target 20 into a single continuous anomaly of 1.2 kilometres in length, has been dubbed as Big Sky. The mineralisation at Big Sky remains open to the north, south and down dip. Musgrave is advancing RC drilling at the Big Sky prospect.

There remains 2.5 kilometres of strike between Big Sky and Target 14 with drilling results awaited. Musgrave indicated that target areas host little to no historical basement drilling along the new gold corridor due to being obscured by 1-4 metres of transported hardpan clays.

The results at Target 14 further highlight the potential for discovering new mineralised positions while growing the current resource base. 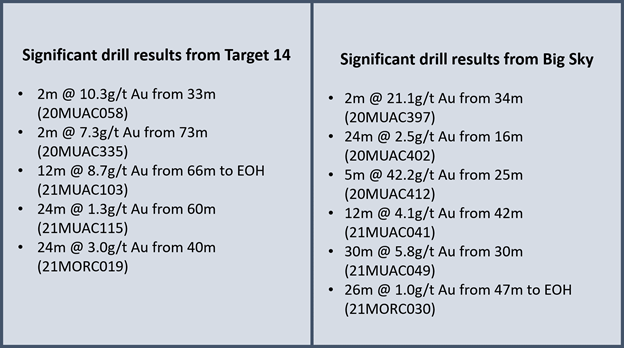 During the Quarter, a 2,600-metre diamond drilling program consisting of seven drill holes commenced on Lake Austin with the aim to follow-up the extensive gold anomalies at the Lake Austin North and West Island prospects. The program is underway currently. 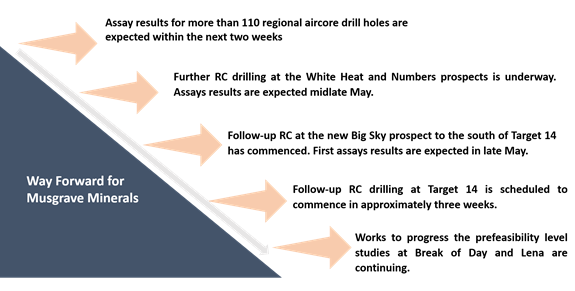 A Snapshot of Corporate Activities

During the quarter, Musgrave appointed Mr Brett Lambert as a Non-executive Director. Mr Lambert holds extensive skills and expertise across project development and mining, which will be of great significance to the Company as it advances through development studies to mining.

At the quarter-end, the Company held cash of A$23.8 million.