The Company tested a variety of targets through wide-spaced aircore drill holes while drilling at some holes aimed at testing the interface directly above numerous bedrock anomalies dentified in the dipole-dipole IP survey.

Most significantly, the drill program was aimed to confirm intrusive rocks as the source of the three bullseye magnetic anomalies and testing for IRGS mineralisation within and close to them. 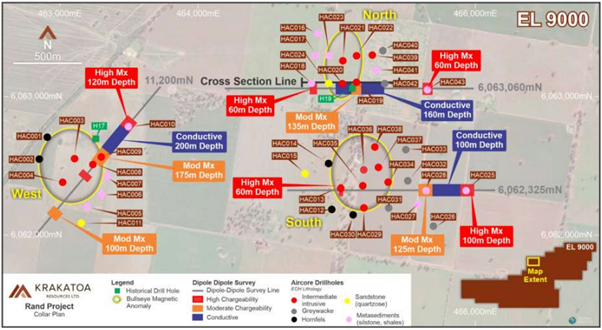 KTA had undertaken a maiden aircore (AC) drilling program during March-April 2021 with 43 holes totalling 2,761.7m that concluded over the three areas (west, north and south).

Encouraging results from the drilling program

Moderate to strong anomalous IRGS pathfinder elements were returned from the holes, and the IRGS model was confirmed through anomalous gold in multiple holes within the weathered intrusive units. Moreover, phyllic alteration was intersected in numerous holes within or close to the intrusives that are characterised by IRGS.

KTA also gathered the following gold results from the bedrock:

KTA has also received assay results from the final batch of rock-chip samples, with results reinforcing the potential for economic gold grades again. The samples were collected during reconnaissance fieldwork undertaken earlier in 2021 and bucky quartz veins at Show Day Mine pitted were anomalous in Au, As and Sb.

IMPORTANT UPDATE: Krakatoa Resources cranks up exploration at Rand and Mt Clere in May 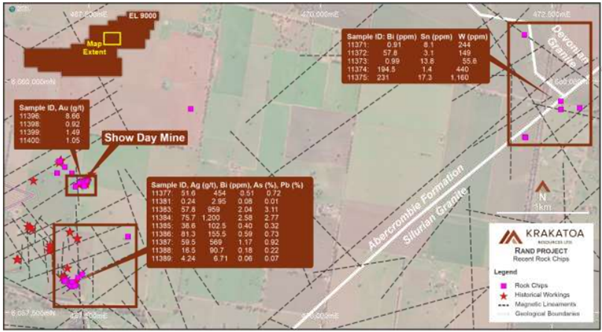 The exploration over the past 12 months by KTA across the Rand Project has suggested the potential for a significant IRGS to be hosted within the Bulgandry - Rand area. This hypothesis is strongly endorsed by historical mining and the recent reconnaissance drilling.

The Company is encouraged and plans to move forward with additional exploration programs on the back of confirmation for the IRGS model with gold mineralisation intersected in all three intrusives through the first-pass AC holes.

An RC ± DD drilling program aimed at testing the IP anomalies and the intrusives will be a part of KTA’s follow-up work for the bullseye targets. This drilling shall comprise of 6-10 holes spanning over 2000 metres and is anticipated to be finalised around late 2021 to early 2022, once the crops are harvested.