Gold exploration in the Tennant Creek/Davenport region is going from strength to strength for King River Resources Limited (ASX: KRR).

The latest high-grade rock chip results at Kurundi add to the momentum of KRR’s smooth exploration journey in the Tennant Creek region. So far, the endeavours have churned out impressive results, with significant accomplishments including:

A NW-SE trend to the vein revealed from reconnaissance of the old workings are eclipsed by shallow cover with grab samples returning significant gold values along an interpreted two-kilometres strike.

According to Results NTGS, a projected gold weighing 25-75kg was mined from historic workings in the Kurundi Gold field. Grab samples (T3,000,061 and T3,000,068) were from veins that were off the main trend, and both returned +0.5g/t Au indicating the presence of other mineralised vein trends in the area.

The rock units covered by EL32199 are same as those at Kurundi within the Whistle Duck–Edmirringee trend.

Several veins sub-cropping have been identified, via mapping and sampling, from under substantial areas of alluvial cover, and three veins have returned above 0.1g/t gold results with the highest grade being 2.47g/t Au, 4.7% Cu and 0.16% Bi.

Mapping indicated that the main Whistle Duck prospect is positioned on a broad North-West trending vein with 0.1g/t Au results, returned along a strike of 155 metres.

Also, the prospect has not witnessed any other historic exploration with the exception of rock chip sampling at the main historic digging.

Warramunga Formation rocks are covered under the northern part of EL32199, comprising the Davidson Gold prospect.

Mineralisation at the Davidson area was in quartz hematite rocks and has the best results of 2.74g/t Au with 0.13% Bi and 10% Fe. The elevated Fe, Cu and Bi values indicate potential resemblances to iron oxide copper-gold mineralisation at the main Tennant Creek.

There has been neither historical systematic exploration nor drilling in the area.

Other Plans for Tennant Creek Exploration 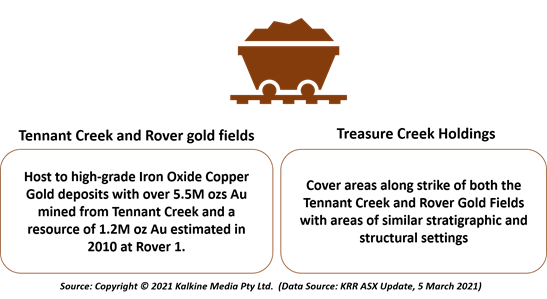 KRR expects to make a significant gold discovery by carrying out systematic exploration along with new and advanced geophysical techniques to target drilling.

Exploration in the project areas focuses on IOCG (iron oxide copper-gold) style mineralisation, characterised by the mineralisation of gold and copper, linked with ironstone bodies, likely of the Tennant Creek Style.

The Company intends to forge ahead with exploration in the Tennant Creek region during the first half of 2021, setting the stage for drilling of best targets later in the year. 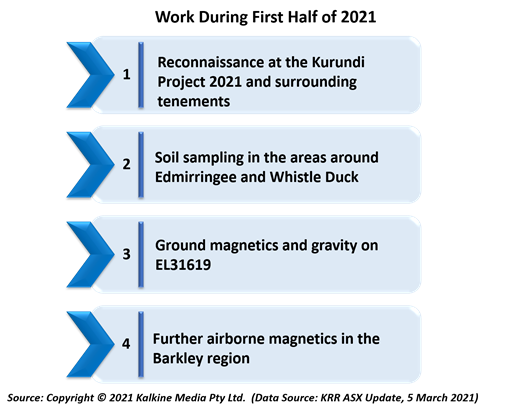