The outcomes further bolster Musgrave’s exploration model for an extensive gold system beneath Lake Austin. The Company would therefore commencefollow-up diamond drilling in early February to test the gold targets.

An Overview of Drilling Program Conducted So Far

A total of 436 holes were drilled in both the phases for an advance of 48,895m on Lake Austin.

The aircore drilling campaign obtained geological and geochemical data which was integrated with geophysical data. It was then used to provide vectors for basement drilling and target a large-scale gold system.

The results that were previously announced include:

The Company has received composite gold results for all drill holes under the Phase 2 program consisting of 187 holes for 26,016m

In 2018 and 2019, a significant thickness of basement gold mineralisation was intersected at the A-Zone target on Lake Austin.

The regolith gold anomaly extends over a strike of more than 1.5km. New significant results from West Island include: 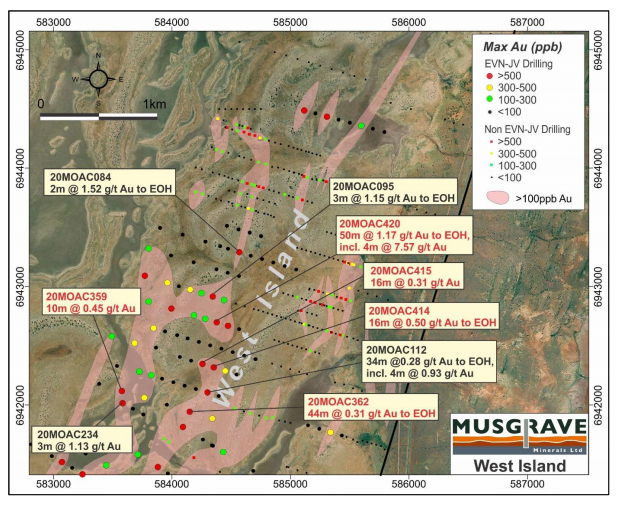 So far, Musgrave has received a combination of four-metre composite assays and one-metre individual samples from the Phase 2 aircore program. The existing datasets are currently being integrated with the results for defining final basement drill hole locations for diamond drilling, which are scheduled to commence soon.

Developments Panning Out at Musgrave 100% Tenements

Musgrave Minerals is also engaged in advancing developments at the Company’s wholly owned tenements at the Cue project area.

Commenting on the recent results, Musgrave Managing Director Rob Waugh stated that the aircore drilling under the Lake Austin joint venture continues to define solid, consistent gold anomalies that indicate an extensive mineralised system in the basement. He noted that Musgrave is looking forward to kickstart diamond drilling next month that would test basement beneath several such large regolith gold targets.