Metallurgical coal or coking coal is a crucial component in the steelmaking process. The carbon required for making steel comes from coking coal. On an average, 780kg of coking coal is used to produce one tonne of steel.

The prices of metallurgical coal soared to record highs in 2021 and went on to correct a little during the months of November and December. The prices again started to rise in January and the successive months. The recent spike in coal prices is the result of supply constraints due to an energy crisis in Australia and the Russia-Ukraine war.

Australia is a world leader in the exports of metallurgical coal. However, right from the beginning of 2022, Australia has been facing heavy rains and a surge in COVID-19 cases, disrupting operations across some coal businesses.

The Russia-Ukraine war has added more uncertainty as sanctions have limited access to major imports of Russian machinery and equipment. Notably, Russia is also a major exporter of metallurgical coal.

Another resource-rich country, Mongolia also has a rapidly developing coal mining industry. Mongolia is a border country of China, which accounts for the largest consumption of metallurgical coal in the world.

In northern Mongolia, Aspire Mining Limited (ASX:AKM) is leaving no stone unturned to advance the development of its flagship Ovoot Coking Coal Project (OCCP). The Perth-headquartered company is focused on becoming a key global supplier of coking coal.

Aspire plans to haul its product via road to Erdenet, where it is developing a terminal to load coal in train barracks and transport to the Chinese market.

The Ovoot Project currently holds an estimated coal reserve of 255Mt. The project will employ an open-pit mining method, which is highly cost-effective with respect to underground mining.

A pre-feasibility study on the project has provided encouraging project economics figures, including net present value or NPV10 of US$878 million and an internal rate of return (IRR) of 49.4%. The company is currently engaged in finalising a definitive feasibility study.

Why Aspire’s Ovoot Project will be a potential gamechanger

Mongolia is a neighbouring country of China. Moreover, Mongolia is located in the vicinity of Russia, Japan, and Korea, some of the world’s largest producers of steel.

Since the Russian invasion of Ukraine, several countries have been trying to cut trade ties with Russia. Japan, EU member nations, South Korea, and several other countries are looking for alternative suppliers of Russian exports.

The properties exhibited by Ovoot coal make it highly desirable for the steel industry. A wide plastic range makes Ovoot’s coal apt for blending with several other coal types having narrower melting ranges. 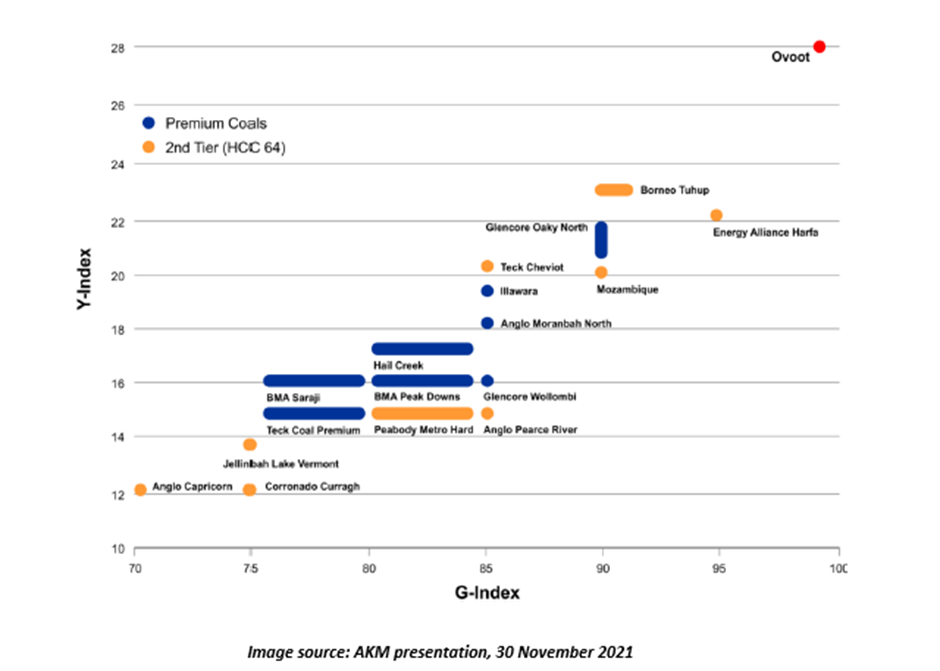 Aspire adheres to high standards of governance and transparency. The company has included green energy alternatives to power the mine site to reduce the overall carbon footprint.

Also, the mine plan includes the transportation of the product via road and rail from the mine site to the end market. Nearly 75% of the distance will be covered on rail. The rail engine’s emission is relatively lesser than trucks for each tonne of coal transported.

Recently, the company pledged to plant 10 million trees in support of Mongolian President’s initiative to plant one billion trees by 2030 in the country.