The merger is expected to create a new global uranium player with one of the world’s largest uranium Mineral Resource inventories of 389Mlbs. The merged group will operate two advanced, world-class assets, with annual production capacity potential of ~3.0Mlbs and 3.5Mlbs for Deep Yellow and Vimy, respectively. These uranium assets sit within Tier-1 uranium jurisdictions of Australia and Namibia.

What’s more, the combined entity with significant scale will also have a cash resource of AU$106 million. 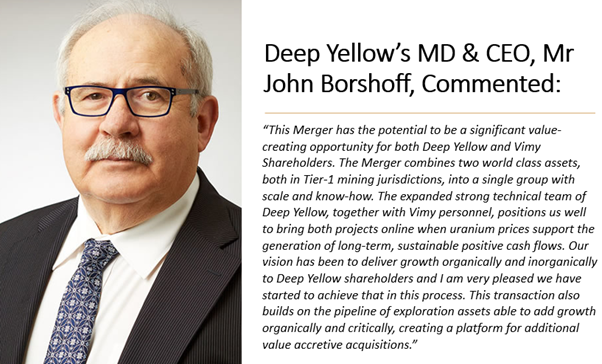 The Board of Vimy has recommended the shareholders to accept the offer in the absence of any other superior deal. Moreover, Vimy Directors intend to vote in favour of the proposal.

The re-organisation of the Board of the Merged Group is expected to be completed over the next 12 months as per the ASX Corporate Governance Principles and Recommendations.

The merger of Deep Yellow and Vimy is expected to create a leading independent uranium platform in Tier-1 uranium jurisdictions, positioned to become a supplier of choice to major utilities.

Significantly, the merged entity will have access to 389Mlb of attributable resource inventory – which is likely to be one of the largest in the world and the highest among its peers. DYL also highlighted benefits from the financial strength and stability of the combined platform.

DYL operates its flagship project in Namibia, while Vimy has its assets in Australia. Both are premium mining jurisdictions for uranium and would add diversity to the asset portfolio.

The merged group is estimated to have a Pro-Forma Market Capitalisation of AU$658 million. The strong balance sheet of the merged group with cash and cash equivalents of ~AU$106 million and no debt as of 31 December 2021 would enable the Group to have more funding flexibility.

Also, the combined Board and Management team have deep experience in uranium exploration and marketing that would certainly help to capture a larger market share.

A scheme booklet will be circulated to all Vimy shareholders at a later stage. The booklet will contain information pertaining to the Scheme and the basis for unanimous recommendation of the Vimy Board. It will also contain an Independent Expert Report and other vital details of the Scheme for the shareholders.