Triggered by the significant update, COD shares edged up over 17% to close at AU$0.990. 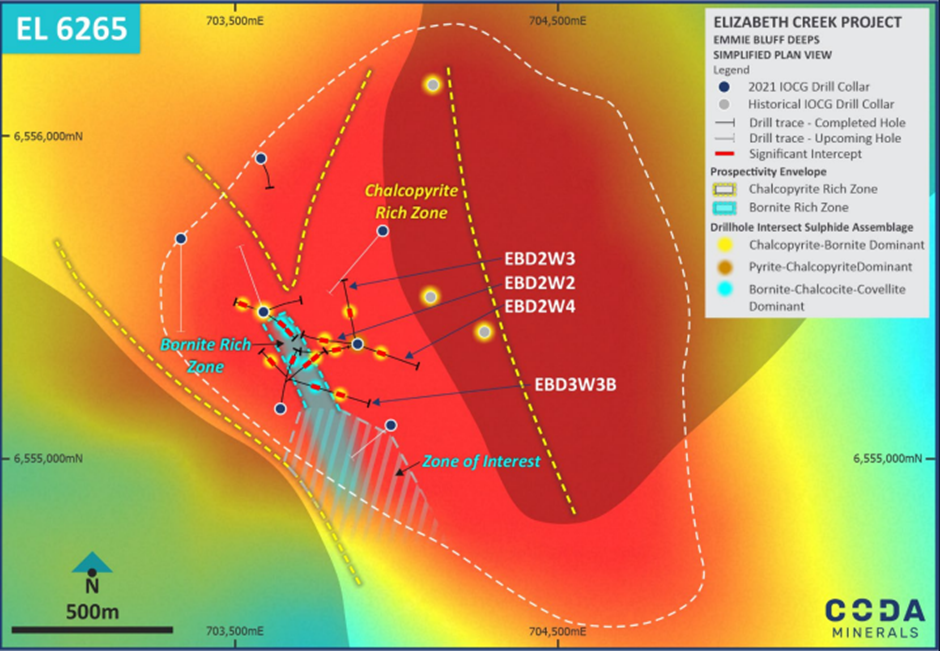 While the Company released visual observations of mineralisation from the five drill holes, EBD2, EBD2W1, EBD3, EBD3W1 and EBD3W2, assay results remain outstanding due to delays at assay laboratories. The Company anticipates receiving most of these results before Christmas this year.

The Company released the visual results from the holes in June, since then the strategic objectives of the ongoing drilling program include:

In July 2021, the initial intersection was followed up by an announcement on visual estimates from 2 daughter wedge holes drilled from the parent hole. A significant intersection of high-grade bornite dominant copper mineralisation was demonstrated in Wedge 2.

In October 2021, a material increase to the lateral extent of the mineralisation was demonstrated from five additional drill holes- two parent and three wedge holes.

The presence of a higher grade bornite-rich core was demonstrated within an overall laterally extensive chalcopyrite halo at Emmie Bluff Deeps.

A Snapshot of the latest Results

Four new wedge holes, which includes two wedges from parent hole EBD2 (wedges 2W2 and 2W3) and two from EBD3 (wedges 3W2A and 3W3B) have been completed. The results include:

A fifth wedge hole EBD2W4 is underway. While all the new holes have intersected copper-bearing sulphides at or about the target depths, mineral intersections encountered in 3W3B and 2W3 are most significant.

It brings the mineralisation’s total lateral extent encountered by Coda in its primary area of interest to an area of around 450m E/W and 250m N/S. Moreover, potential for significant extension in multiple direction is suggested through historical data incorporation. The Company also reported extension of the gravity anomaly to an additional ~1,400m to the southeast further than the southernmost mineralised intersection.

The presence of material amounts of copper-bearing sulphides throughout the reported intervals have been confirmed by both field logging and hand-held XRF measurements.

Extension of the copper bearing mineralisation over a laterally extensive area has been confirmed by additional visual observation.

The results are highly encouraging, however when taken in context with previous drilling they demonstrate extension of the mineralised envelope to the north and southeast. The mineralisation remains open in both directions.

The Company intends to test both the directions. In the short-term, it will prioritise extension testing of the bornite-dominated core to the south. The next planned hole would target an extension of ~250m in the southeast.  Results from the hole are anticipated early in 2021.

Other Developments that remained in focus

Coda recently completed a heritage survey with representatives of the Kokatha people, who are the Traditional Owners of the project area. It has enabled the Company to significantly expand the number of potential drill sites available for future exploration.

An application for an ongoing EPEPR over Emmie Bluff has also been submitted to the South Australian DEM (Department for Energy and Mining). The development is expected to significantly streamline the environmental approvals process and provide the Company more flexibility in its drilling plan.