Assay results of over 32 out of the 64 holes drilled during the follow-up auger drilling campaign at the Eden Pan were received during the quarter. All holes drilled within the mineralised Upper Brown Clay Unit and all hole samples have been sampled up to a depth of 9.60m from surface. The entire sequence of the holes has been sampled from the Upper Brown Clay and the Middle Green Clay Unit, returning lithium mineralisation.

The Middle Green Clay Unit, also known as the Middle Unit (MU), includes the dominant lithological unit and has been utilised in the estimation of maiden mineral resources. The green clay unit was recorded at 18 out of the 32 drill holes from which assay results have been received and extended to a maximum of 9.60m. As many as 43 out of the 64 holes drilled during the follow-up auger drilling campaign intersected at the Middle Green Clay Unit.

The best drill hole intercepts for the high-grade Middle Green Clay Unit had been recorded at the centre of the pan. The results included -

An extensive regional assessment of the Bitterwasser Lithium Project suggested the presence of a large-scale lithium-in-clay and lithium-in-brines minerals system within the closed basin, similar to the Clayton Valley in Nevada.

During the quarter, Arcadia reported the granting of a Mining Licence styled ML223 at the tantalum project. The tenement had been granted for a period of 15 years by the Minister for the Department of Mines and Energy of Namibia on 3 June 2022 and authorised Arcadia’s subsidiary to undertake necessary development work towards mining operations for Base and Rare Metals, Industrial Minerals and Precious Metals at Swanson. 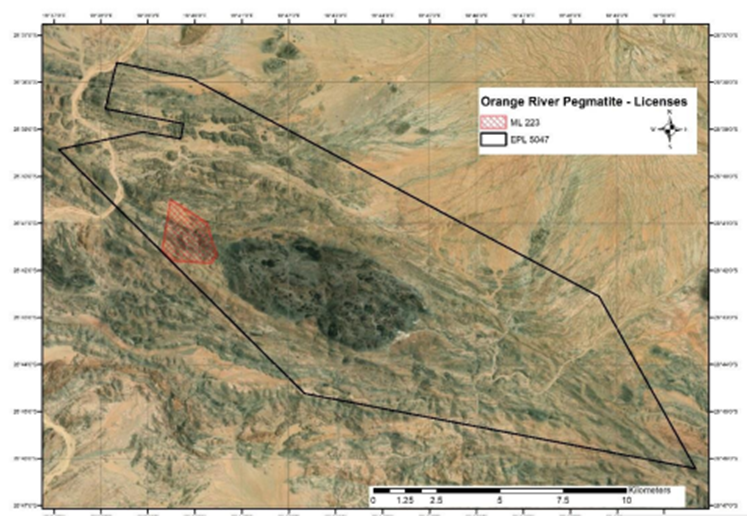 As per the Minerals (Prospecting and Mining Act) of 1992, a mining licence can be renewed by prior to its expiry, contingent on the presence of a sufficient quantity of minerals for economic operations.

Arcadia’s subsidiary and tenement holder, ORP, has also received an Environmental Clearance Certificate (ECC) for the development of Tantalite mining operations at Swanson. On 5 May 2022, the company announced the revised mineral resource estimates for the project with a total indicated and inferred resource of 2.59Mt with a grade of 486 ppm Ta2O5 (an increase of 17.9%), 73uppm Nb2O5 and 0.15 % Li2O. The revised resource upgrade represented an increase of 115%.

The mineral resource estimate is based on 283 channel samples and 52 diamond boreholes on a 50m grid spacing over 10 out of the 15 shallow pegmatites at Swanson. So far, only 15 of the 200 known pegmatites had been explored at Arcadia’s three tenements at the project.

Currently, the company is undertaking a feasibility study at the project and anticipates concluding by September 2022.

Historical coring samples at the project were collected, sampled and assayed. These samples recorded the first PGE and Au mineralisation within ultramafic units of the Tantalite Valley Complex. Some of the best results are -

The Tantalite Valley Complex (TVC) had been subjected to geological studies that included multiple field sampling campaigns, with 94 field samples along with 57 historical samples and supporting data from historical records, hyperspectral mapping, and stream sediment sampling.

Arcadia has been progressing on the geophysics, mapping, and geochemical sampling programs at the project. The company plans to undertake drill operations at the project by September 2022.

During the June quarter, AU$409,000 was invested into exploration and development activities, while an additional AU$145,851 was utilised on the acquisition of the Bitterwasser Lithium project.

Arcadia would continue its exploration and development efforts across its portfolio projects with a vision to create values for its shareholders.