It looks like gold is facing some difficult time in crossing its crucial resistance level of USD 1,600 per ounce, which is making the up-ride of ASX gold stocks slightly bumpy. While the ASX gold stocks are under a bull run; however, seeing some whiplashes in between, which might be attributable to the halt in the gold rally, and its third attempt to cross the USD 1,600 mark.

However, as they say, “when going gets tough, the tough get going”, so are the ASX gold mining companies such as Regis Resources Limited (ASX:RRL), and Saracen Mineral Holdings Limited (ASX:SAR). Both the mining companies posted their earnings for the half-year ended 31 December 2019, and it would be worth tracking if the results could push both the miners up on ASX.

RRL reported a record Net Profit after tax of $93.4 million with a net profit margin of 25 per cent for the period, reflecting ongoing strong profitability of the Duketon operations.

The Company generated a revenue of $371.36 million from ordinary activities, which remained 17 per cent up against the previous corresponding period. The increase in revenue, and in turn, profitability was majorly due to the higher average realised price, and despite a fall in sales, RRL remained in profitability for the period.

RRL suggested in the notes to the consolidated income statement that, the rise in the cost of goods sold was mainly due to the increase in the cash cost of production. The cash cost for the period surged by ~ 10.95 per cent against pcp to stand at $163.06 million.

As per the reporting norm, the AISC contains the exploration cost as well, and RRL reported the exploration and evaluation written off $1.06 million, up by 6 per cent against pcp.

The Duketon Gold prospect of the Company produced 178,482 ounces of gold with a pre-royalty cash cost of $866 per ounce and AISC of $1,219 per ounce; and, while the production remains lower against pcp, the cash cost and AISC surged.

RRL mentioned that the fall in production was primarily due to the decrease in throughput & lower head grade, due to short term variations in the mine schedule and reduction in mill throughput amid an unplanned maintenance shutdown at Garden Well, which further raised the AISC of the prospect, and in a loop, increase the overall AISC of the group for the period ended 31 December 2019.

Apart from that, increased stripping ratios, slower mill rates associated with the transition to fresh rock and an increase in royalty costs as a result of the higher gold price, also contributed majorly in the increased AISC of the group.

The increase of 18 per cent in the average gold price against pcp, which stood at $1,981 per ounce, supported the revenue and overall profitability.

SAR reported revenue of $409.93 million for the period, which remained ~ 45.42 per cent up against pcp. The increase in sales and in turn, revenue; the royalties paid by the company surged by ~ 73.20 per cent against pcp to stand at $15.71 million.

The AISC of the Company surged slightly by 1 per cent against pcp to stand at $1,041 per ounce, which could be justified with an increase in gold production.

For Carosue Dam Operations, SAR utilised the ore from Karari-Dervish and Deep South underground, along with the supplemented ore, purchased through toll treatment arrangements, and the previous stockpile.

SAR reported the income post incorporating its 50 per cent interest at the KCGM JV, which it acquired from the global giant- Barrick Gold in November 2019. The KCGM JV hosts the Super Pit gold mine in Kalgoorlie-Boulder, WA, and currently, SAR and Northern Star (ASX:NST) holds 50 per cent stake each at the prospect.

The operational highlights of KCGM are as below: 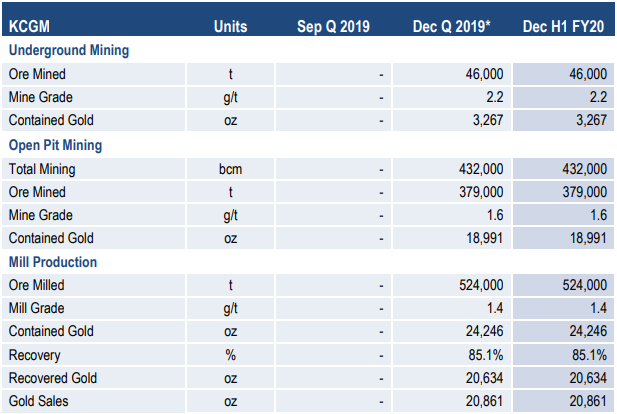 On the exploration front, SAR drilled 230,000m across various project areas during the period, and as per the Company, drilling has been conducted at various stages of exploration from greenfields regional aircore to near mine resource definition. The aim behind the exploration remained conventional, i.e., to grow organic project pipeline in order to deliver additional growth and mine life to the existing operations.

SAR declared no interim dividend, and the stock last traded at $4.210, up by 0.08 per cent against its previous close on ASX.