Australia-based Platina Resources Limited (ASX: PGM) has signed a cash and share deal with Canada-based Eastern Zinc Corporation (CSE: EZNC) for the sale of its 100% owned Skaergaard palladium and gold project in Greenland, resulting in a value creation of more than AUD 8.3 million. This follows the recent renewal of Skaergaard’s exploration licence by the Greenland Mines Department for a further three-year period to December 2022, which also waived all the 2020 tenement expenditure obligations.

PGM is focused on advancing its portfolio of early stage precious, speciality and base metal projects through exploration, feasibility, permitting and development, with its project portfolio now including

As per the agreement signed between the two parties, Platina Resources will receive cash worth CAD 0.5 million and CAD 7.15 million worth of Eastern shares (55 million shares, based on the last traded price at CAD 0.13 per share) for the project.

On completion of the transaction, Platina Resources will become a major shareholder in Eastern Zinc Corporation and have right to a Board seat. At the same time, Eastern will be renamed and become a palladium focused exploration and development company after the transaction is closed to reflect its strategic direction.

The deal finalisation will be subject to a final confirmatory due diligence and approvals by the regulatory bodies in Greenland and Australia. 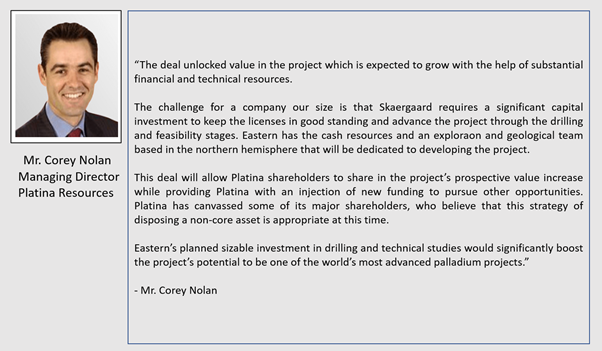 With the Skaergaard project acquisition, Eastern Zinc plans to shift its strategic focus to palladium and look to expand its portfolio of palladium assets, with a company name change.

Besides, the Board of Eastern including two geologists and a metallurgical engineer, demonstrate a very strong technical capability and the ideal skill set required to move Skaergaard towards the next phase of development.

Eastern Zinc President and CEO Paul Teniere and Director Fred Tejada are geologists with a wealth of international mineral industry experience across a board range of deposit types. In addition, Stephen Stine, an Eastern Director, is a metallurgical engineer with a broad range of experience from feasibility to construction and operations.

The Canadian company recently completed a capital raising of CAD 2 million and has a potential significant pool of capital available, ~ CAD 1.5 million of in-the-money share warrants, which when exercised would provide sufficient capital for meeting near-term exploration objectives associated with the Skaergaard project.

Skaergaard Project, located on the east coast of Greenland, hosts one of the world’s largest undeveloped palladium resources (outside of Russia and South Africa), with a significant gold endowment. Platina Resources controls two Exploration Licence including EL2007/01 100 km2, (hosts the Skaergaard deposit) and EL2012/25, 16 km2, located 10km east of EL2007. 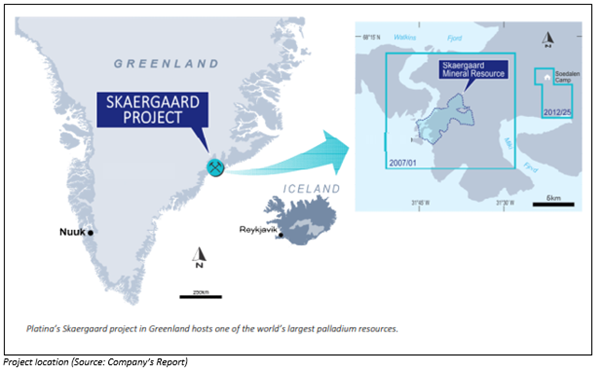 The scoping study into the project was finalised in December 2019 and highlighted its development potential. Since that period, prices of gold and palladium have gone up by 34% and 42% over the pcp, respectively. The market fundamentals for gold and palladium are expected to remain robust, which is expected to positively impact the project’s outstanding economics and business case.

Around AUD 16 million have been invested in drilling, metallurgy, and studies for this project by Platina Resources, according to the Company presentation in January 2020.

Palladium's largest single use (~85%) is in automotive catalytic converters, which clean petrol vehicle exhaust emissions and these are particularly driving the demand for this mineral at the backdrop of stricter environmental standards around car emissions being enforced by authorities worldwide.

Most supply comes from by-product of nickel and platinum production while ~30% of supply comes from recycling. Currently, there are few sources for primary supply, owing to which, industry commentators are projecting large palladium supply deficits over the coming years, thereby highlighting a positive price outlook for the metal.

Going forth, advancement of the project to the feasibility stage requires -

Moreover, engineering, design and technology factors need to be further assessed for the design and location of the process plant, tailings disposal as well as mining methods. It is also critical in defining the project concept and the expected capital and operating costs.

Travel permitting, in 2H20, Eastern Zinc is planning a channel sampling field program evaluating the potential for a smaller open cut mining operation prior to underground mining. This program would provide much help in understanding the shallower bulk and selective mining potential of any underground operations. Furthermore, a follow up drilling program is required for the same.

(Note: All the currencies mentioned are in AUD unless specified)