PGM would acquire a 100% interest in the tenements from vendors, Corporate & Resource Consultants Pty Ltd and Bruce Legendre.

Challa Gold Project, including two high-quality exploration licence applications (E58/552 and E58/553) covering 293km2, is located 50km east of the gold mining town of Mount Magnet and falls on Challa, Windimurra (owned by Challa), Meeline and Wynyangoo Pastoral Leases. The sealed Mt Magnet-Sandstone Road, which runs through the project area, provides excellent, all-weather access, and there is no Native Title Claim over the area. 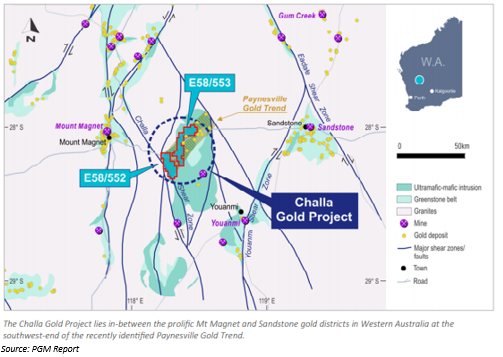 Geology: Tenements E58/552 and E58/553 lie within the Murchison Domain of the Youanmi Terrane in the Yilgarn Craton and occupy some portion of the 2.81Ga Meeline Suite of the Windimurra Igneous Complex. Archaean mafic-ultramafic igneous intrusions and associated dykes and sills comprise about 40% of the greenstones in the northern Murchison Domain, and the largest of these layered intrusions is the predominantly gabbroic Windimurra Igneous Complex.

The Challa Shear runs along the western side of the Windimurra Igneous Complex, where gabbroic rocks are in faulted contact with granite and greenstone. It is a regional-scale structure forming part of the gold-controlling structural architecture of the Youanmi Terrain.

Within the Challa Gold Project area (less than 2% exposed in outcrop) is Archaean geology dominantly concealed beneath alluvium deposited in water courses that follow the principal regional structures such as the Challa Shear.

Historical Exploration: Back in 1997, Aarex Resources NL attempted to explore for gold beneath cover, whereby shallow (1 m - 6 m) auger holes (Landcruiser mounted auger) were drilled to collect soil samples on a 1000m by 200m grid from the interface between residual soil and alluvium. Through this work, a number of gold soil anomalies (3 to 7ppb Au) were identified but never followed-up, because of their apparent low gold tenor. However, these results are considered highly significant.

Recent Exploration Activities: Although broad areas of alluvium cover most of the Challa Gold Project area, a small number of rock samples have been collected for assay. At Max Bore, two samples of a 1m-wide gossanous quartz vein assayed 5.1ppm and 6.8ppm Au, and significantly, the mineralised structure that controls the mineralisation strikes NW under cover to where it intersects another major, NE-trending structure with the sample orientation as the Paynesville Gold Trend.

Other sparse outcrops of vein quartz located within the vicinity of the target structures have also assayed up to 115ppb Au and 44ppb Au, indicating that gold bearing fluids were active. 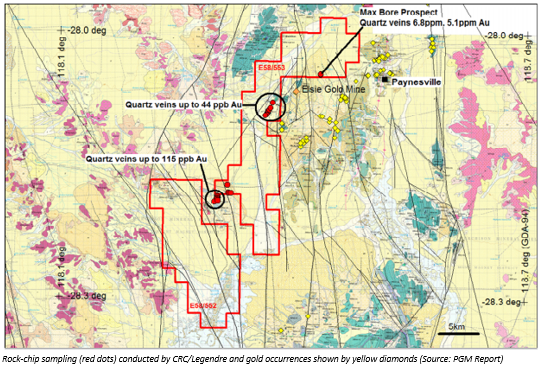 Platina Resources is excited to gain exposure to a world-class gold province at a very low entry cost after selling its Skaergaard palladium and gold project in Greenland in early June 2020.

After the exploration licence applications are granted at Challa, the Company plans to mobilise on-site through an all-weather access road and begin field activities like a low-cost Rotary Air Blast (RAB) drilling program for testing the primary targets mentioned above.