Things That Made Investors Pounce on Jio

Of late, Reliance Industries Limited (RIL) – an Indian conglomerate business – has been on a funding spree after selling stakes in its telecommunications and digital business, Jio Platforms Limited. Large and deep-pocketed investors had lined up for the investment in Jio Platforms.

Reliance Industries is run by Mukesh Ambani, who is climbing in the rich list and is currently the fifth richest man, globally, as RIL shares continue flirting with lifetime highs. RIL is present in the fields of retail, digital services, petrochemicals, petroleum refining and marketing, media & entertainment, and oil & gas exploration and production.

But the conglomerate has taken a lot of leverage in the launch of its digital services business and other growth plans. It is undertaking a capital raising program, through a recently completed rights issue and investments by global tech investors in Jio Platforms Limited.

Most recently, Google has committed to acquire a 7.73% stake in Jio Platforms, with the two companies working towards the development of smartphones in India. In April, Facebook acquired a 9.99% stake in Jio Platforms. Over the months, Reliance has attracted a number of investors for Jio, including Vista Equity Partners, KKR, Mubadala, ADIA, TPG, L Catterton, The Public Investment Fund, Silver Lake, General Atlantic, Intel, and Qualcomm.

Over the years, Reliance Industries has invested substantial capital in the development of Jio as a brand and its services. In telecommunications, Jio broke into the scene with free SIM cards, data and calling for its customers, effectively dismantling the telecom industry and sparking consolidation as well as bankruptcies.

In December 2015, Jio beta was launched, and it was made publicly available in September next year. Now, it is the largest mobile operator in India. At the end of March 2020 (FY20), Jio had 387.5 million subscribers.

Jio’s 4G footprint in India is backed by tower infrastructure and best fibre in the country. Average data per user consumption was more than 11 GB/month, according to the company’s annual report for FY20. Its pricing has been the main driver of large-scale adoption and leading market share. Its telecom footprint is also upgradable to 5G.

Interesting Read: An Annual Report a Day Keeps the Losses Away; Get the Most from Reading an AR

It continues to have significant room for growth in wireline infrastructure, as Indian consumers have lagged in fixed broadband services, and fibre penetration is significantly lower compared to global benchmarks.

Reliance has invested over US$50 billion in Jio since its inception. Now Jio is embarking on a new journey with new growth areas, including gaming, education, healthcare, agriculture, mixed reality, Narrow Band IoT, IaaS/PaaS, and manufacturing.

During the year, Jio conducted restructuring of the digital businesses and placed them under Jio Platforms Limited, which is now equipped with world-class and future proof digital assets. Jio Platforms has all digital assets of Reliance spanning across connectivity and technology investments. 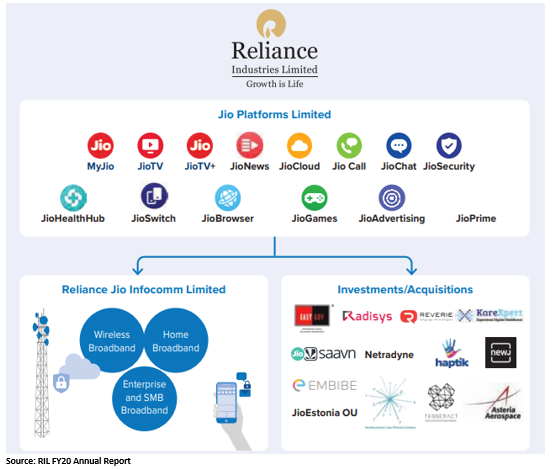 The restructuring has enabled to incorporate a debt-free and financially strong holding company, which is able to pursue growth opportunities, strategic investments and partnerships. Facebook’s investment in Jio Platforms is aimed at increasing digital capabilities of India.

Jio and Facebook would emphasise on micro, small and medium enterprises, small merchants and SMEs in the informal sector. WhatsApp, Reliance Retail and Jio Platforms also penned a commercial agreement, which would see further progress on the digital commerce business of Reliance Retail on the JioMart platform using WhatsApp.

It is also monetising its infrastructure assets, which include 175k towers and 1.1 million kilometres route for fibre. Infrastructure assets have already been transferred via a scheme, held through 2 separate Infrastructure Investment Trusts (InvIT). Brookfield and affiliates have acquired a stake in Tower InvIT, and discussions are underway for Fiber InvIT.

It has also invested in future technologies, including mixed reality, blockchain, big data, IoT, computer vision, secure identity, AI/ML, supercomputing, robotics, IaaS, and PaaS. Some of these investments are augmenting the services offered by Jio, while others would drive the launch of Jio’s next set of digital offerings.