What Makes Alice Queen Limited a Darling Amongst Investors?

Alice Queen Limited (ASX: AQX) is an advanced gold exploration company, which is based in South Yarra in the Australian state of Victoria. The company is focused on the development of its two core projects, including 84.5 per cent owned Horn Island Gold Project in the Torres Strait in far north Queensland and 100 per cent owned Mendooran Copper/Gold Porphyry Project in the Molong Volcanic Arc in central New South Wales.

With every passing day, the popularity of AQX is growing among investors. The company’s shares on 14 October 2019 closed the day’s trading at AUD 0.051, which is 4.082 per cent higher than its previous closing price with a market cap of AUD 38.56 million and ~ 786.91 million outstanding shares.

Additionally, the stock of AQX has delivered outstanding returns to its investors. In the past one month, three months and six months, the stock zoomed 157.89 per cent, 345.45 per cent and 206.25 per cent, respectively.

Let us have a look at some of the factors that could be attributed to the company’s growing popularity.

This brownfields gold project of the company holds prospects for gold-bearing Carbo-Permian style vein/breccia. The project is believed to have a pit deposit (JORC 2012) of 7.9Mt at the rate of 1.9 gram per tonne gold for 492,000 ounces and 35 square kilometres of underexplored mineral field. Additionally, according to metal zonation, the best gold zone may be at a depth of 200 metres to 500 metres, below the depth of existing drilling.

Recently the company also completed a soils and rock chip program at the project as part of its joint venture with St Barbara, owing to which the existing coverage increased by 1.8 kilometres to NW from the gold resource at the project.

Furthermore, the project has huge infrastructure advantage as it is well serviced with access to fresh water supply, airport with recently built terminal serviced by Qantas Link, township of Wasaga with approx. 700 people and deep-water port, among others. 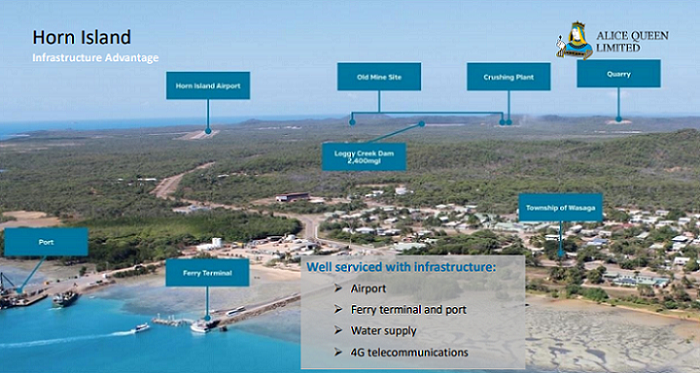 For the project, Alice Queen is working on target generation under the JV with St Barbara. The project is believed to hold the ability to progress the Mineral Resource Estimate to BFS.

At the Mendooran project, 15 porphyry copper/gold targets have been generated as well as identified for drill testing. Additionally, the company has complete access arrangements to the highest priority target areas for exploration drilling.

The company’s current plans for the Mendooran project are:

Parallelly, the company is working on its another project, Yarindury in New South Wales, for which AQX recently in mid-September 2019 reported enhanced prospectivity, owing to the discovery of exceptional copper-gold results within 700 metres of the boundary of the project by another gold production entity, Alkane Resources Limited.

The company is now planning to carry out a maiden drill program at the project and initiate geological mapping in the area adjoining the recent discovery by Alkane Resources. More on the company’s activities and plans concerning the Yarindury Gold project can be read here.

Datt Capital is a well-known name as a fund manager in Australia. Recently, the company welcomed Datt Capital as its new shareholder (~ 6 per cent in AQX) after the two parties entered a deal for a share placement. As part of the deal, Datt Capital injected funds worth AUD 1.5 million in exchange for 50 million ordinary shares of AQX at a price of 3 cents per share.

To date, the company’s activities with respect to its projects – Horn Island, Yarindury and Mendooran highlight the potential that it holds as an attractive player in its market. The cherry on the top is the recent capital raising deal that reflects the confidence of investors in Alice Queen Limited-an ASX listed player that is focused on several exploration and mining opportunities in Australia.