What Is Mending For Commercial Property Stocks?

The commercial property sector has been a major contributor to the economic growth of Australia. As per the media reports, the Australian property market is expected to witness slow growth towards the end of the year, prior to a rebound in the fiscal year 2020. Letâs discuss some of the commercial property stocks and their recent updates.

Scentre Group (ASX: SCG) is an Australia registered company involved in property management and development. The company was officially listed on ASX in 2014. Recently, the company via a release dated 27th June 2019 announced that it had sold Sydney CBD office towers to certain funds, which are managed by Blackstone for an amount of $1.52 billion. In addition, the company released an amount of $2.1 billion of capital to create long-term value for securityholders and pursue its strategic objectives. Previously, the company also introduced a joint venture partner in Westfield Burwood.

Scentre Group further stated that it intends to start a buy-back of SCG securities amounting to $800 million as a consequence of the above stated transactions. This will enable SCG to increase its ROE while maintaining a strong balance sheet position. The company will also utilise the proceeds from the transaction to repay debt. This dilution does not consider the redeployment of capital, which includes the buy-back program of $800 million. There is no change in the forecasted distribution of 22.60 cents per security for FY19. Turning to operating performance, the total specialty in-store sales witnessed a rise of 1.5% in Q1 FY19 and the total lettable area for the period stood at more than 3.8 million sqm.

Goodman Group (ASX: GMG) is an Australia registered company, which owns, manages and develops business space and industrial properties in key markets all over the world. Recently, the company released its Investor Day Presentation, outlining its regional updates. With respect to urban logistics, the company stated that the most industries, including e-commerce, traditional retail and 3PLs are re-evaluating their supply chains, which is resulting in demand outstripping supply in the urban locations.

The company is focused on major infill markets throughout the region along with quality, scale and intensification opportunities. The business drivers for the Asia region includes large growing urban populations with rising disposable income, demand for convenience driving continued e-commerce take-up throughout all markets in the region and customer demand as well driven by the need to reduce costs and gain efficiency through space aggregation and rationalisation.

Recently, S&P Dow Jones Indices announced quarterly rebalance of the S&P/ASX Indices, wherein it was reported that Goodman Group has been added to the S&P/ASX 20 Index effective from 24th June 2019. In its Q3 FY19 operational update, the company reported that the AUM for the period stood at $44.1 billion, with the in progress development work of $3.7 billion in Q3 FY19. 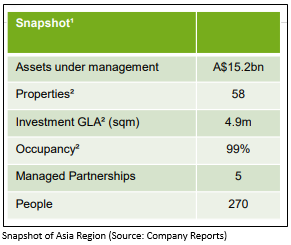 The company reported gross margin and EBITDA margin of 46.3% and 25.4% in 1H FY19 as compared to the industry median of 74.1% and 62.2%. GMG posted net margin of 92.6% against the industry median of 85.6%. This indicates that GMG is effectively converting its top line into the bottom line. The company reported current ratio of 3.97x in 1H FY19, reflecting a rise of 12.0%, which means that GMG is improving its position to address its short-term obligations.

Goodman Group stated that its activities related to the development are currently strong and rising. The company expects work-in-progress to reach $5 billion in FY20, given the high-quality locations of the landbank and rising scale of development projects. The group reaffirmed projections for the operating earnings per share of 51.1 cents, reflecting an increase of 9.5% on the financial year 2018, and distribution per share of 30 cents, a rise of 7% on the financial year 2018, based on the anticipation of strong portfolio performance.

Dexus (ASX: DXS) is an Australian REIT, officially listed on ASX in 2004. Recently, the company via a release dated 26th June 2019 announced that it had achieved $250 million valuation uplift throughout its portfolio. The company further stated that external valuations have resulted in a total projected $250 million or an increase of 1.6% on prior book values for the six months to 30th June 2019. Additionally, Sydney and Melbourne office portfolios have proven to be key contributors to the valuation uplift, where the market rent continues to increase.

In another update, Dexus announced that it had sold 11 Talavera Road, Macquarie Park. The company will utilise the sale proceeds to repay debt and to progressively fund projects in the companyâs pipeline of development opportunities. The company further stated that all sectors have given attractive long-term returns. For the period of five years, the total return of 9.7%, 12.8% and 13.5% have been delivered by the retail, office and industrial sectors.

Lendlease Group (ASX: LLC) is involved in the retail property management, asset management and development. The company was officially listed on ASX in 1962. On 18th July 2019, the company via a release announced that it has inked an agreement to undertake the entitlement, development and master planning of 3 major regions in the San Francisco Bay Area with Google. Both the parties, Lendlease and Google will work in tandem for the coming ten to 15 years in order to redevelop LLCâs landholdings in Mountain View, San Jose and Sunnyvale into vibrant mixed-use communities.

The companyâs strategy is influenced by the global trends such as urbanisation, infrastructure, funds growth, sustainability, ageing population and technology. The company reported cash conversion of 92% against EBITDA from FY14 to 1H FY19.

Stockland (ASX: SGP) is a leading diversified property group in Australia. The company was officially listed on ASX in 1987. Recently, the company via a release dated 4th July 2019, announced a strategic capital partnership with Capital Property Group investing 50% interest in the groupâs largest master planned community, Aura at approximately 30% premium to book value. Recently, Legg Mason Asset Management Limited and each of the bodyâs corporate have a become an initial substantial holder in the company with the voting power of 5.03% on 26th June 2019. In other update, the company announced an estimated distribution of 14.1 cents per ordinary stapled security for the six months to 30th June 2019.

The company in its Investor Day Presentation outlined the capital management. Stockland provided capital allocation of 33%, 21% and 46% to communities, workplace and logistics and retail town centres, respectively. 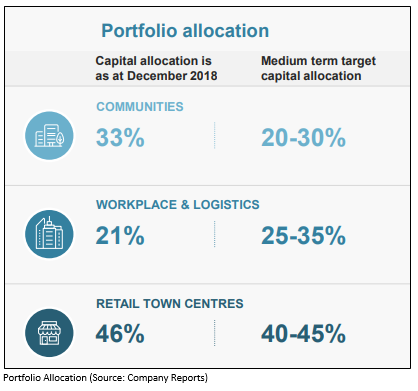 For FY19, the company aims to achieve FFO per security growth of around 5%. With respect to residential, the profits have been maintained in accordance with the companyâs expectations despite lower settlements of around 5,900.