Volt Resources Limited (ASX: VRC) is a graphite exploration and development company, currently advancing works at its flagship asset - The Bunyu Graphite Project (100%-owned) located in Tanzania, with critical infrastructure such as sealed roads and easy access to the deep-water Mtwara port in vicinity along with key Environmental and mining licenses in place. In December 2016, the Pre-Feasibility Study (PFS) of the project, which is being developed in two stages, was completed, confirming a compelling technical and financial case. 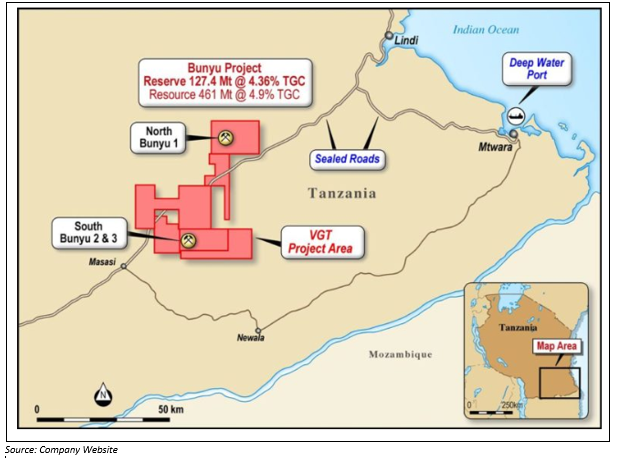 With Stage 1 being the priority, Volt Resources is currently progressing the funding activities for the same to achieve the targeted funding of USD 40 million (including Development cost: USD 31.8 million; Resettlement compensation: USD 3.5 million).

Tanzanian and Mauritian Note Issues - In line with that, the company informed on 10 September 2019 that the draft prospectus for the Company’s 100%-owned subsidiary, Volt Graphite Tanzania Plc’s (VGT) proposed Stock Exchange of Mauritius (SEM) Note Issue and listing has now been lodged for approval. On 29 January 2019, the company had informed to be going ahead with this alternative funding option in parallel to other initiatives.

Now, Volt expects that SEM would take approximately four (4) weeks to approve the prospectus, providing an expedited pathway to securing development funding. Besides, the SEM Note Issue and listing does not require the approval of Tanzanian Government, allowing VGT to issue the SEM prospectus and begin the fund-raising process immediately following receipt of approval. The company would disclose further details of the Note Issue terms and conditions as the SEM approval is received.

In addition to the above, the company is continuously holding discussions with the relevant government authorities in Tanzania with respect to the finalisation of approval for VGT’s Tanzanian Note Issue and listing of the Notes on the Dar es Salaam Stock Exchange (DSE). Volt also added that the recent discussions between the authorities and VGT have indicated that the approval process has advanced in terms of priority.

VGT is also undertaking discussions with African banks and North American institutional funds to obtain further support for Bunyu Project’s Stage 1 funding strategy. The company expects that more tangible progress would be witnessed in these ongoing discussions once final approvals are received and funding advances with the respective Tanzanian and Mauritian Note Issues.

Riverfort /Yorkville Debt Facility - On 10 September 2019, Volt Resources also informed that it had finally fully repaid the outstanding loan notes due to Riverfort Global Capital and Yorkville Advisors following the receipt of funds from its recently closed Share Purchase Plan (SPP) and Top-up Placement (announced on 21 August 2019). The company had secured a six-month AUD 1.3-million funding facility in January 2019 from Riverfort and Yorkville, LP, with a Face Value of AUD 1.5 million and the maturity date extended to 14 September 2019.

Around AUD 1,299,000 were raised from the SPP (Lead Manager and Underwriter: Patersons Securities) which was well supported by Volt’s shareholders, eligible directors and CEO Trevor Matthews with all of them taking up their maximum allocation. Besides, further AUD 350,000 were raised through the top-up placement to sophisticated and professional investors., also led by Patersons Securities.

The Feasibility Study into the development of Stage 1 was completed in July 2018. Through Stage 1, Volt aims to establish the infrastructure and gain a strong market position to lay foundation for the significantly larger Stage 2 expansion project at Bunyu in the future, depending upon the market appetite for Bunyu graphite products.

With several binding and non-binding offtake agreements in place, Volt Resources is firmly focused on winding up the funding process to move to commencement of works for the Stage 1 development of Bunyu as quickly as possible.

Production from Stage 1 is scheduled to begin by Q3 2020 and subsequently, cashflows are expected to be generated by the second half of 2020 (H2 2020).