VIVA Leisure, owing to the satisfaction of all conditions, was able to successfully settle the acquisition process that was initially expected to be completed on or before 31 March 2020.

Mr Harry Konstantinou, VIVA’s CEO and Managing Director commented that the penetration in NSW and inclusion of additional sites in the ACT and Victoria would bolster the company’s market reach and penetration.

VIVA, after the acquisition, has 75 operative locations with more than 95,000 members.

The before-time finalisation of the EPS enhancing acquisition is expected to promptly strengthen VIVA’s financial performance while also providing it with an attractive opportunity to integrate its newly acquired clubs.

Out of the 17 health clubs that FitnFast operates, Viva has acquired 13 clubs that produced revenue of $17.9 million and EBITDA of $3.6 million in FY19. The acquired health clubs include 10 in NSW, 2 in VIC and 1 in the ACT.

Charlestown in NSW, Cheltenham in Victoria, Westfield and Liverpool Street in Sydney, CBD are the four locations that Viva has not acquired as they did not satisfy Viva’s acquisition guideline, however, may be considered for future acquisition if their operating metrics change.

FnF has been delivering quality performance ever since its inception in 2010, and has the leased gym space of 15,600m2. Beginning its focus on the big box model of health clubs, FnF, through its low-cost operation, expanded to several locations. The average gym space available to the gym members comes to be 1.38 members/m2. 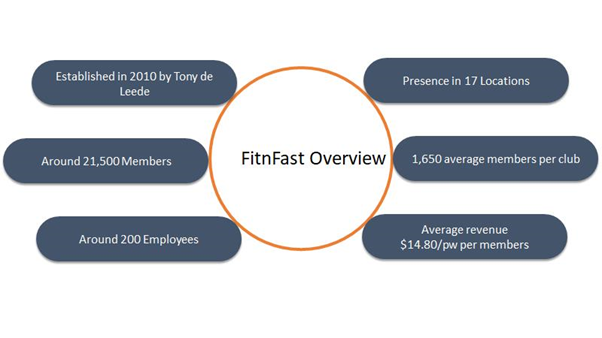 The early completion of the acquisition by VIVA leisure would provide holistic opportunities to the fitness and health group to carry on with its expansion plans and financial goals.

The following strategic rationale works behind the acquisition:

The group’s estimated revenue for FY20 is $58.7 million that includes the contribution of $4.9 million from Healthworks and $4.5 million from FnF, with EBITDA target of $14.2 million.

FnF acquisition finalisation comes after Viva Leisure signed a sale and purchase agreement for the Queensland-based eight Healthworks Fitness Centres in October 2019, expected to add 10,000 new members. The acquisition at the price of $2.7 million was declared to be fully supported by Cash Reserves.