Investors are in a constant hunt for publicly listed hot stocks that are prone to deliver good returns, but of course with the market dynamicity vigilance in the back of their minds.

One such company is from the health and leisure industry, Viva Leisure Limited (ASX: VVA) operating over 40 health clubs in the ACT, NSW and Victoria. The technology focussed health club owner was founded in 2004 by Mr Harry Konstantinou and Mr Angelo Konstantinou, who remain active on the Board and Executive Management team. Considered to be the brand that stands for value, quality and a club or community atmosphere, VVA comprises of diverse brands which helps its members to achieve their personal fitness goals in a supportive and non-intimidating environment.

On 25 July 2019, VVA updated the market about its trading stance for the financial year ended 30 June 2019. The company was successful in growing its total year-end membership numbers to 54,039, up by 18,408 on the prior corresponding year. The pcp growth was over 50 per cent (52 per cent) while the Prospectus forecast target, which was 53,000.

VVA expanded its location numbers by 19 operating locations, to 40. This was a whopping 90 per cent growth, with 12 being organic greenfield locations and 7 were by way of 4 separate acquisitions. VVA surpassed its Prospectus forecast target in this regards too, which was 36. Presenting a bright outlook, the company expects to open more new locations (~15-20) in FY2020, 8 of which had been identified in the Prospectus.

Continuing on its growth trajectory, VVA had three operational hiit republic locations, with two locations to commence shortly. The hit membership is currently over 775 members; 67 per cent have subscriptions to the unique hiit republic and Club Lime membership combined option.

On 17 June 2019, VVA had announced its successful completion of the Fitness 24/7 businesses in Albury, New South Wales and Wodonga, Victoria for $3.75 million. The acquisition welcomed three clubs of the region in VVAâs portfolio and extended its geographical reach into regional Australia, with the first location in Victoria. The clubs were expected to have 3,500 members on board and contribute $3 million in revenues and $1.4 million in EBITDA in FY20. The company had pro-actively commenced club conversions, including installation of the bespoke member management systems, self-service member portal, automated front-end and back-end systems, online joining portal and staff member management portal.

Of these activities, the company notified in its market update that the conversion of front and back of house member management systems, branding, signage and all other requirements had been accomplished, and the location was operational and rebranded as Club Lime. An icing on the cake was the member feedback that the company received, which was extremely positive.

The company also tapped the Canberra region by signing a binding Sale of Business Agreement for the purchase of Project Fitness Group. The new business would be operational under the hiit republic brand and the settlement was completed on 24 July 2019. With the total acquisition price being $230,000, the acquisition represented a 3.16x EBITDA multiple pre-synergies. This enhances the geographical reach of the company to 50 locations, 41 of which are operational with 9 further locations secured and in different stages of opening.

VVA recently acknowledged the signing of a binding sale and purchase agreement for Fitness 24 Seven Wodonga Express. The location, second in Victoria, would be the companyâs operating location number 42, and would have a capacity for 700 members. Growing the Groupâs portfolio, the acquisition would add approximately 350 new members and was likely to be concluded later in the week.

Besides this, VVA is constantly strengthening its position in NSW and Victoria and has agreed to lease terms for three new greenfield clubs in Shepparton, Albury and Shellharbour, with locations likely to open in the next consecutive quarter.

âOnce all locations are open, Viva Leisure will have cemented its market-leading position in the regionâ, says delighted CEO, MD and Co-Founder Mr Harry Konstantinou.

On 8 August 2019, VVA announced the launch of its Club Lime Member ID app, designed exclusively to enable keyless entry into its 24/7 clubs through memberâs mobile phones. A technology focused player, VVA thrives to engage with its customers through cutting edge technology. The app would be functional on both Android and iOS and would allow members to access any Club Lime and hiit republic facility through their phones, which means that members would no longer need to carry their access pass, keyring fob or membership card.

Stock Behaviour and Returns on ASX

Recently listed on the ASX on 7 June 2019, VVAâs stock last traded at A$1.165, up by 1.74 per cent relative to its last trade with the close of trading hours on 23 August 2019. The market capitalisation of the company is A$60.23 million with approximately 52 million shares. In the past one month, the VVA stock has generated 19.10 per cent return.

It would be interesting to witness the unveiling of expansion activities, investorsâ interests, acquisitions and the overall growth trajectory that the company paves for itself in the remainder of 2019 and beyond. VVA is expected to announce its Full Year FY2019 financial results on 28th August 2019.

Main highlights of the past few weeks that has kept Viva Leisure in the limelight, and for all good reasons. 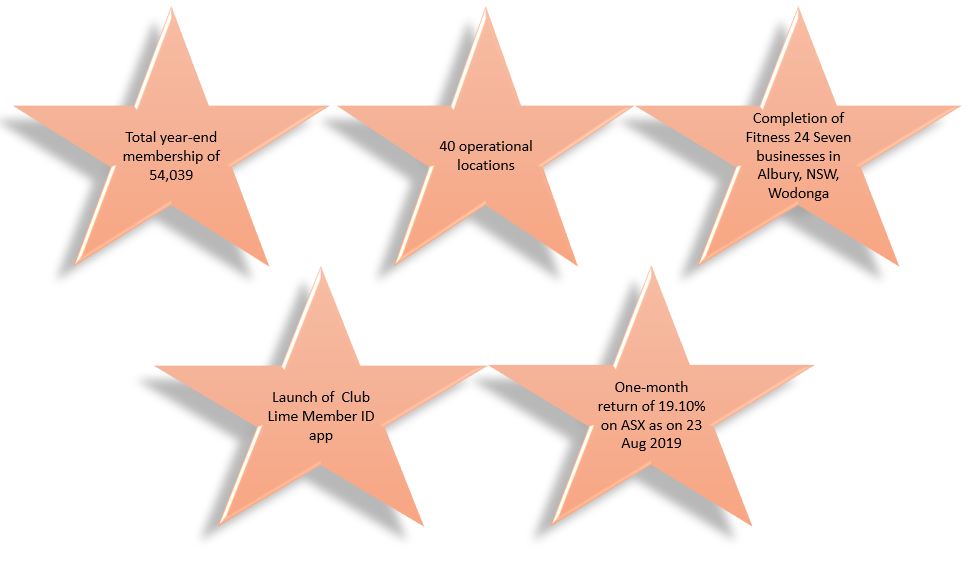