Updates On Consumer Discretionary Stocks- TAH, ALL and CWN

There are certain goods and services that are not necessarily essential for a consumer, but desirable, given that the person desiring it earns enough to afford them. This category of goods and services constitute the consumer discretionary segment. These goods include apparel, leisure and entertainment, automobiles and durable goods. Few examples of this segment are McDonald’s, Amazon, Japan Airlines, eBay, Sony, Altria Group, Dominos, Cinemark and Walt Disney.

Regarded amongst one of the world’s most urbanised societies, with a major chunk of its population residing in urban areas, Australians are frequent users of the consumer discretionary stocks. The past couple of years have projected significantly high average wealth possessed by an adult, and with the growth of the retail sector, it can be inferred that Australians can well afford to shell out money and invest in consumer discretionary goods, services and even stocks. It should be noted here that the buying of goods related to consumer discretionary is extremely affected by the existing condition of the economy.

On the Australian Securities Exchange, there are approximately 141 companies that trade under the Consumer Discretionary sector. This sector is believed to be consisting of the industries that are perhaps, the most sensitive to economic cycles. The manufacturing segment includes durable goods, textiles and apparel, leisure and entertainment and automotive. The service section consists of media production and services, restaurants, consumer retailing services and hotels.

Let us now look at the performance of the Consumer Discretionary sector on the ASX: 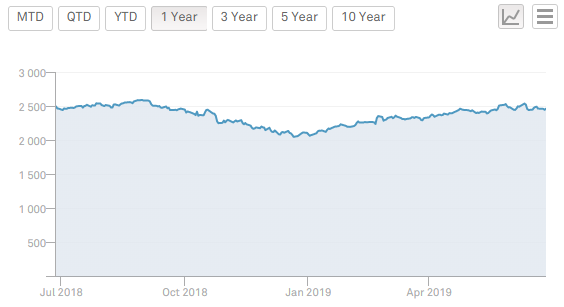 In the backdrop of the above furnished information, let us now look at the company updates of the three stocks, (picked from the list of the largest market capitalisation stocks), and understand their current stock performances and returns.

Created in 1994, Tabcorp Holdings Limited is amongst the few integrated gambling and entertainment companies across the globe. It has three core businesses- Gaming Services, Lotteries and Keno and Wagering and Media. The company delivers these services via its retail and Sky media and digital platforms.

The company had generated around $917 million through its businesses for the racing industry in FY18. The company’s revenues for FY18 were $3.8 billion and with over 9,000 venues across Australia, the company has over 3 million registered customers. The company primarily has racing partners and club association partners. It is regarded as the most significant financial contributor to Australian racing.

New CFO on Board:

On 28 June 2019, the company announced that it had made a new appointment to the company’s Board. Adam Newman was appointed as the TAH’s new Chief Financial Officer and would commence his role in early October this year. Damien Johnston, who was the company’s CFO since 2011, would stay with the company for a while to ensure an even transition to Adam Newman.

Adam Newman is well experienced in finance and operational leadership roles in complex environments and was the CFO of ASX-listed energy company AusNet Services Limited (ASX: AST) since 2013, prior to his recent appointment in TAH. He has also served at BlueScope in Australia and the US.

On 30 April 2019, the company presented at the 2019 Macquarie Conference and stated that it had completed its combination with Tatts Group in December 2017 to create the gambling entertainment group, that it presently is. As per the FY19 initiatives, the company had introduced the Take A Break for TAB. The National Consumer Protection Framework implementation was in progress. The company was also artificial intelligence enhancements, inclusive of real-time filters and further automated customer intervention.

The company stated that it was focussed to deliver between $130m and $145m of synergies and business enhancement in FY21.

Besides this, TAH stated that it had long-dated licenses across the globe for its products.

On 28 June 2019, the company’s stock last traded down by 0.67 per cent relative to its previous trade and was valued at A$4.450. With a market cap of A$9.05 billion, and around 2.02 billion shares outstanding, the stock has generated a negative return of 2.82 per cent in the last one and three months respectively, and a positive return of 4.43 per cent in six months. The YTD return of the stock is 5.66 per cent.

A global games powerhouse, ALL was incorporated in 1953, and was listed on ASX in 1996. The company is into the development, manufacturing, designing and marketing products and services, inclusive of electronic gaming machines, casino management systems, and digital social games. Its registered office is in New South Wales and the company is operational worldwide, in over 90 countries.

Financial results for the H119

The Group’s constant progress in the Americas region and Digital businesses area, resulted in this performance throughout the ANZ. The Normalised revenue was up by 20.8 per cent and recorded at over $2.1 billion. The EBITDA had increased by 19.2 per cent (in reported terms) and the company generated Normalised operating cash flow worth of $439 million, which was a good jump from the $302 million figure in the prior corresponding period. 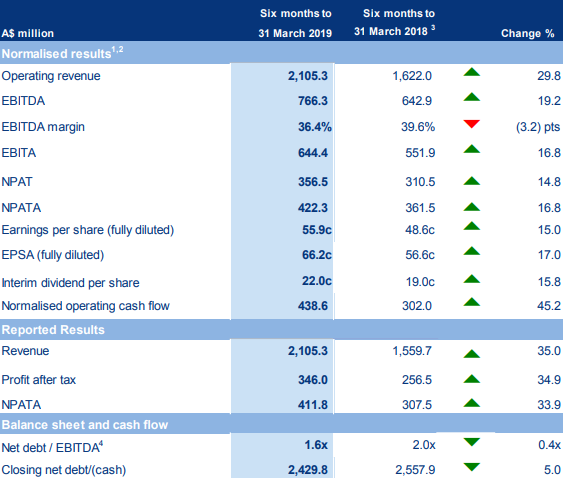 Company Profile: Counted amongst Australia’s largest entertainment groups and has its prime business and investments in the integrated resorts sector. CWN is a major contributor to the country’s tourism sector and the employment, training and social responsibility programs. The company takes interests in various digital businesses as well. It was listed on ASX in 2007 and has its registered office at Southbank.

Financial Performance: In February 2019, the company announced its 2019 Half Year Results and notified that the Reported NPAT was up by 9.9 per cent on the prior corresponding period and amounted to $174.9 million. 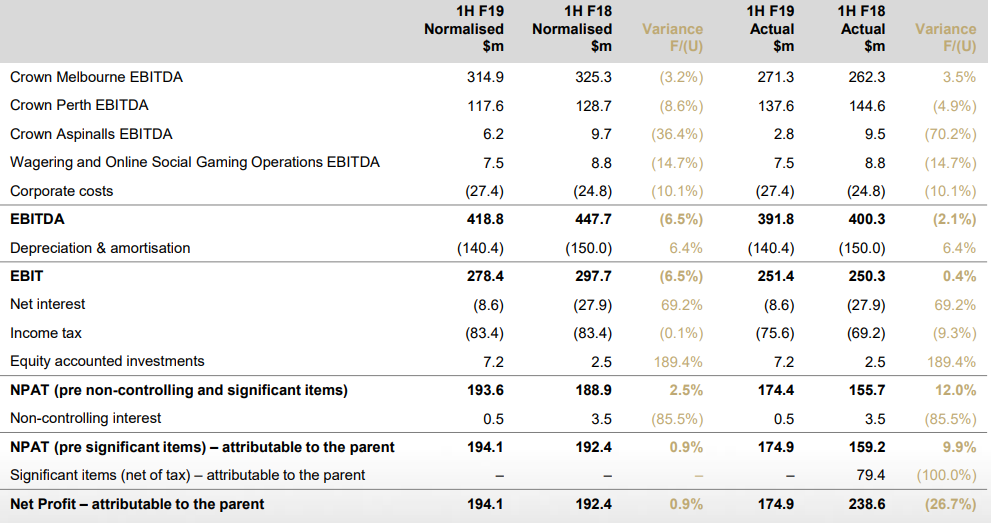 The company notified that the Construction of the Crown Sydney Hotel Resort was progressing and would be completed as decided in the first half of calendar year 2021. The total gross project cost would be approximately $2.2 billion, and the net project cost was approximately $1.4 billion.

Share Price Information: On 28 June 2019, the company’s stock last traded down by 0.08 per cent, relative to its previous trade, and was valued at A$12.450. With a market cap of A$8.44 billion and approximately 677.16 million outstanding shares, the stock has generated returns of 9.20 per cent and 4.27 per cent in the last three and six months, respectively. The YTD return of the stock is 6.50 per cent.