Capital Raising: Capital raising is the process of raising funds for the purpose of expansion, working capital requirement, long-term growth, etc. Primarily, there are two ways the companies raise funds, either through debt or through equity. The companies can also raise funds via a mix of both called the hybrid, like the convertible bonds, etc.

In debt capital, the company raises funds which are in the form of bank loans, bonds, etc. The second method of raising capital is through equities. In equity capital, the companies sell the shares to generate funds. These shares could either be common shares of the company, or it could even be its preferred shares.

In this piece of article, we will have a look at three companies which have raised capital for some of their business requirements.

MSM Corporation International Limited () is an online entertainment company from the communication services sector. The company is into the business of building as well as launching new digital entertainment products for individuals belonging to the United States, Great Britain, Australia, Canada, New Zealand and South Africa. In order to maximize the reach of its products and services worldwide, the company enters into partnership with local operators which belong to the non-English speaking markets.

Megastar is the major product of the company. It is a global, mobile-first talent competition, under which the performers belonging to any category can compete.

On 20 June 2019, the company announced that it had completed a capital raising worth $1.44 million, regarding which an announcement was made on 28 November 2018. The capital raising was managed by Emerald Capital Australia Pty Ltd.

As per the announcement made by the company on 1 May 2019 and 22 March 2019, the company highlighted its intention to expand the reach of its Megastar online competition platform so that it could be used by other sectors as well as categories of the global mobile competition framework beyond North America. Earlier this platform was limited to its existing partners as well as the affiliates of The Riva Group’s Esports talent identification.

This strategy is expected to reduce the operating cost of the company linked to the operation of the platform, in addition to competitions to be faced by the licensees.

Other than this, the company released its cash flow for the month of May 2019 in the form of Appendix 4C. The company used A$0.146 million in its operating activities. There was a net cash inflow of A$0.495 million from financing activities. The cash inflow was through the issue of convertible notes. At the end of May 2019, MSM had cash and cash equivalents worth A$0.414 million.

TasFoods Limited (ASX: TFL) belongs to the consumer staples sector and is into the diversified food business. It leverages the unique environment of Tasmania to create premium food products which it sells to Aussies and as export products.

In Tasmania, the company has a strong and loyal customer base. It has a stable of high-value food brands in poultry, dairy and horticulture segments.

The company reported strong growth for FY2018. Its sales revenue increased by 25% to $38.4 million, while gross profit grew by 54% to $10.7 million. Moreover, the company registered positive operating cash flow in the second half of FY2018.

The dairy operation of the company is small and growing with various brands and product types. In this segment, the company reported a 140% growth in the FY2018 to $5.96 million.

TasFoods Limited is in the process of expanding its dairy business by acquiring Betta Milk Co-operative Society Limited. On 13 May 2019, the company entered into an agreement, under which it is purchasing the milk processing assets as well as brands of Betta Milk. In order to acquire Betta Milk, there will be a requirement of about $11.5 million in cash. Out of these $11.5 million, $8 million would be generated through a fully underwritten non-renounceable rights issue at $0.12 per share. The rights issue is expected to open on 1 July 2019 and would close on 12 July 2019 at 5 pm Sydney time. The record date for the rights issue is 7 pm Sydney time on 25 June 2019. The rights Issue is fully underwritten by Wentworth Global Capital Partners.

Betta Milk was formed in 1956. It holds a market share of 17 percent of Tasmanian fresh milk sales and 37 percent of the sales of branded milk. It is expected that in FY2019, Betta Milk would be able to generate a sales revenue of ~ $16.7 million. The acquisition is likely to complete in late-July 2019.

Key attributes of the assets of Betta Milk are:

The acquisition of Betta Milk would complement as well as provide strength to the dairy business of the company and will also have further growth opportunities. 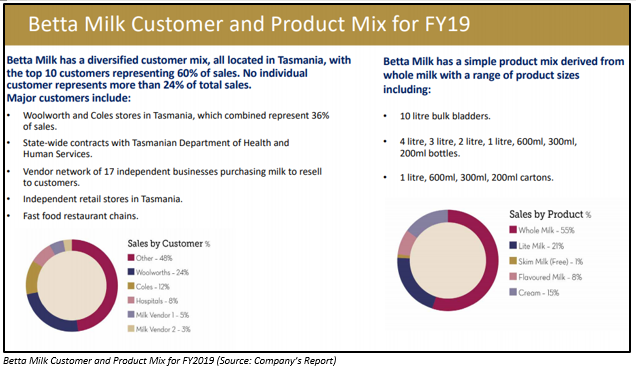 By the end of the trading session on 21 June 2019, the price of the shares of TFL was A$0.165, up by 3.125% as compared to its previous closing price. TFL holds a market capitalization of A$33.06 million and has approximately 33.06 million outstanding shares.

Freedom Foods Group Limited (ASX: FNP) is a company from the consumer staples sector and is into the business of producing as well as selling soy yogurts, beverages, dips and vegetarian soy-based foods. Other than this, the company operates as a natural food manufacturer, distributor and marketer. It is also engaged in marketing as well as distributing canned seafood.

There are two new recent updates from the company. The first is the completion of the pro rata accelerated non-renounceable entitlement offer and institutional placement (Placement) of ordinary shares and the second is the update on the development progress of its Nutritional Ingredients Business Platform.

On 19 June 2019, the company announced the completion of retail entitlement offer and shortfall placement. The total number of issued ordinary shares of the company is 272,903,282.

After the completion of the capital raising through Entitlement Offer and Placement, on 20 June 2019, the company provided an update on the Nutritional Ingredients Business Platform growth. The company has reached a long-term supply agreement for Lactoferrin with a key global pharmaceutical firm.

Under this agreement, a significant portion of the existing, as well as the planned capacity, would be used for Lactoferrin at the Nutritional ingredients facility of the company situated in Victoria.

Lactoferrin is an iron-binding protein in milk that possesses anti-microbial, anti-inflammatory and immunological properties and is used in a wide range of consumer health and nutritional food products worldwide. It is also used in various medicinal products and infant formula.

The fund raised would support the company in accelerating its growth strategy, with $100 million in capital expenditure in Nutritional ingredients through CY2019 and CY2020.