Oventus Medical Limited (ASX: OVN) is an Australia registered company, which is involved in the development of medical devices, targeting people with snoring and obstructive sleep apnoea (OSA). The company was officially listed on ASX in July 2016.

New Agreement: On 15 July 2019, the company via a release updated the market regarding an agreement with an American sleep medicine group. Under the terms of the agreement, which is OVN’s first material contract in the United States, the latter will adopt the former’s O2Vent® treatment platform for the treatment of OSA across eight clinical treatment sites in the US states of Texas, Arizona and New Mexico. Each site will receive a minimum monthly quota of 20 O2Vent® devices.

The company further stated that this contract recognises OVN as the primary supplier of oral appliances for the OSA treatment. The company expects to officially launch the agreement as soon as the U.S. Food & Drug Administration would give a regulatory clearance to O2Vent® Optima oral device.

Obstructive sleep apnoea is a medical illness, wherein the patients experience an absence of breathing that occurs during sleep and leads to disruptive sleep that compromises daytime functions, resulting in excessive sleepiness, memory impairment, depression and a host of comorbidities. This happens when there is an obstruction or collapse of the nose, soft palate and lateral walls of the airway.

The Rollout of O2Vent® Optima: Optima, which is easier to manufacture and carry a low cost of goods, is a new lightweight, nylon version of the company’s O2Vent® oral device. The company launched O2Vent® Optima in January 2019 in Australia and in February 2019 in Canada. 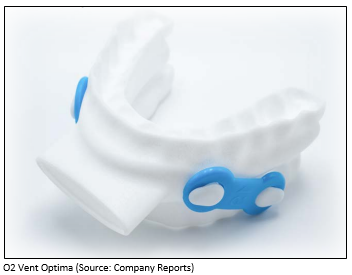 Further Agreements: Oventus Medical Limited is anticipating securing more agreements across the North American region over the coming 12-24 months. It further stated that the negotiations are on track with multiple groups throughout the US, Australia and Canada with a view to significant scaling by the end of 2019 and 2020.

According to the company, the current device market for the treatment of obstructive sleep apnoea stands at US$ 4.4 billion. Of the total, 10% are oral appliances, whose market is projected to grow at a CAGR of 25%.

Codan Limited (ASX: CDA) is engaged in the manufacturing, designing and marketing of several high value-added electronics products for the global environment business. The company was officially listed on ASX in November 2003.

New Contract: On 15 July 2019, the company announced that its division Codan Communications secured a contract for supplying a tactical communications network to an East African government department. The contract worth A$ 15 million entails a full communications platform, incorporating Codan radios and interoperability solution along with a suite of third-party products. The network is due for delivery in 1H FY20.

1H FY19 Results: For 1H FY19, Codan registered sales and EBITDA of $ 128 million and $ 38 million, respectively. It reported a net profit after tax and EPS of $ 22 million and 12.4 cents for the period. The metal detection sales and segment profit witnessed a rise of 29% over the previous first half. The communications sales were increased by 41% and segment profit increased by 85% over the same period a year ago. The company has a strong balance sheet with net cash of $ 13 million. In terms of dividend, the company paid an interim and a special dividend of 4.0 cents and 2.5 cents, fully franked, respectively. 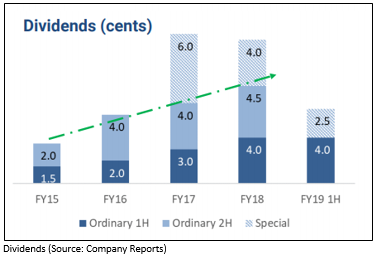 Outlook: Codan Limited is expecting increased sales in the second half of the financial year 2019 and anticipating strong results in 2H FY19. The company provided guidance for full year underlying NPAT to be in the ambit of $ 42 million - $ 45 million. With respect to the base business of the company, it is anticipating producing NPAT in the vicinity of $ 25 million and $ 30 million.

Indoor Skydive Australia Group Limited (ASX: IDZ) is a New South Wales based company, which is the owner and operator of indoor skydiving facilities. The company was officially listed on ASX in January 2013.

Investor Presentation: On 15 July 2019, the company released an investor presentation, under which it unveiled its plans regarding a capital raising amounting to A$ 3.4 million in order to support its growth, diversification and repair strategy.

As per the terms of Entitlement Offer, the eligible shareholders can subscribe 2.5 new ordinary shares for every one share held on the record date of 18 July 2019, at an offer price of $ 0.01. The offer price of $ 0.01 per new share demonstrates a discount of 38% to the 30-day volume weighted average price to 12 July 2019. IDZ will be issuing a maximum of 341,741,285 shares. Moreover, the minimum subscription for the Entitlement Offer to proceed is $ 2 million.

The funding by entitlement offer will allow substantial investment in growth activities, specifically introducing new revenue generating businesses, which include Virtual Reality offerings. Moreover, the company would direct the proceeds towards the execution of a new web platform and digital marketing strategy. It will finance further reduction to interest-bearing debt and other liabilities, as well as enhanced marketing initiatives to fuel revenue. 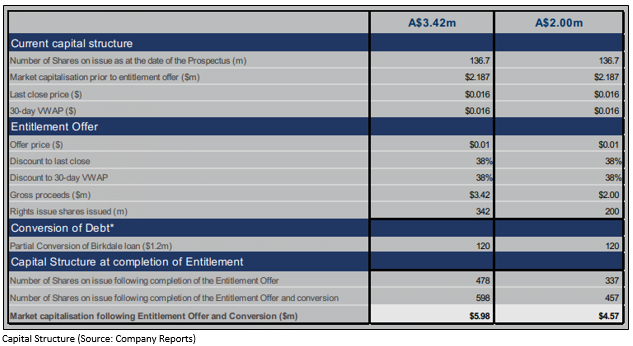 In terms of repair strategy, the company stated that, in conjunction with the sale of its Perth facility and the material reduction in an interest-bearing debt, IDZ is now focused on new business streams, increasing operational performance, paying down its remaining debt and reducing costs. When it comes to the strategy for growth, the company is planning to make an investment in growth activities of $ 900k as well as introducing new website and sport flyer initiatives. In addition, it is planning to implement a digital marketing strategy.

FY19 Trading Update: In an ASX announcement on 15 July 2019, the company provided a trading update for FY19 along with outlook for the financial year 2020. The revenue numbers were replaced in FY19 with higher margin software revenue, which is generating improved profitability for OCL. The licence revenue witnessed a rise of 11% in FY19.

The company, reinforcing the success of its ongoing transition to subscription revenue, registered strong growth in all subscription product lines, with ECMaaS, Connect, Keystone and Trapeze growing 23%, 27%, 21% and 20%, respectively. During the financial year 2019, the company injected $ 12.7 million in its research & development activities, which represents 20% of revenue.

It reported a net profit after tax of A$ 9.1 million in FY19 as compared to A$ 7.4 million in FY18, which reflects year-on-year growth of 23%. The company’s cash balance stood at $ 34.6 million in FY19, up 61% from the same period a year ago. Previously, the company reported financial results for 1H FY19, wherein it posted revenue of $ 29 million.

Outlook: The company will be continuing to utilise the strong cash flow produced by the business to invest in its current product portfolio during FY20. It will also introduce new products via acquisitions, where it is strategically aligned. In addition, it is anticipating all business units to drive profit by the close of FY20.