The below mentioned banking stocks have come with significant updates today. Let’s take a quick look at these stocks.

At 2018 Annual General Meeting (AGM), Westpac received a substantial vote against its Remuneration Report, giving a clear message that the executive remuneration was not in line with the shareholders’ expectations.

This year, the bank expects to make further changes, which will include effectively capturing non-financial risk elements of the performance in executive remuneration. Further, this year, the Board expects to improve the transparency of the remuneration decisions. The remuneration outcomes will be released in the 2019 Annual Report, which is scheduled to be published in early November.

The Bank has completed a detailed self-assessment of its Culture, Governance and Accountability (CGA), which highlighted that at a time when the bank’s CGA is supporting the sound management of non-financial risks, Westpac’s approach is less mature than its management of financial risks approach. Further, it has been confirmed that the bank has an analytical and consultative culture that can slow down its decision-making process, which could further create undue complexity and dilute the bank’s accountability.

In order to avoid this, the bank is undertaking a detailed program to implement the CGA self-assessment recommendations. Currently, Westpac is waiting for direct feedback of the Australian Prudential Regulation Authority (APRA) on the report and will incorporate their recommendations in its plans.

The Chairman, in his letter, also provided an overview of the bank’s half year results. The Chairman has noted that the first half reported profit was down, mainly due to the difficult operating environment and higher restructuring and remediation provisions. However, despite a decline in the earnings, the capital and balance sheet of the bank was in good shape, allowing it to declare an interim dividend steady at 94 cents per share.

The Chairman has advised that the provisions in the first half of 2019 are reflective of the bank’s commitment to deal with the major outstanding issues and these actions, along with the Royal Commission and CGA self-assessment response plans, will ultimately make Westpac a stronger organisation and help it to deliver a more consistent experience for customers.

Recently, Westpac made a significant addition to its Board with the appointment of highly experienced Guilherme (Guil) Lima as Chief Executive of its Business Division. In his 22 years of extensive experience, Mr Lima held various senior level roles in big companies like HSBC and McKinsey.

In the first half of FY19, Westpac recorded a reported net profit of $3,173 million, which was 24% lower than its previous corresponding period (pcp) and along those lines, the bank reported a decline of 22% in its cash earnings, which reached $3,296 million in 1H FY19. 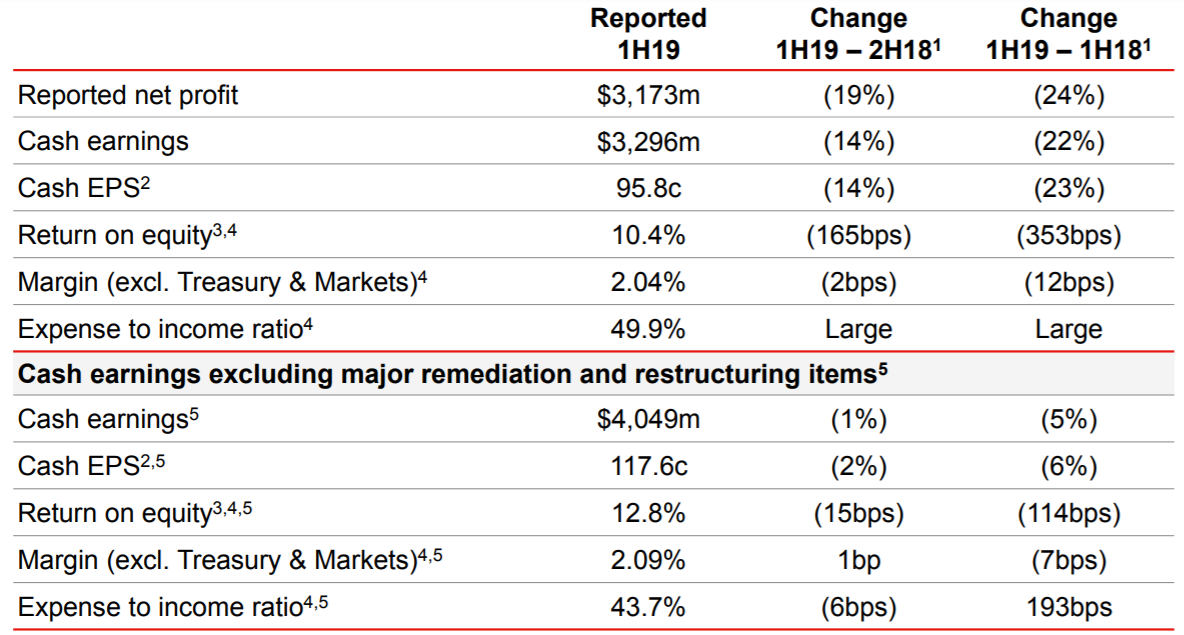 During the period, the bank increased new Australian banking customers by over 36,000 and reported 3% growth in general insurance gross written premiums, building momentum in the customer franchise.

Westpac booked provisions of $617 million (after tax) in 1H19 and $281 million in 2H18, mainly in connection to the provisions related to the remediation programs for:

Australia and New Zealand Banking Group Limited (ASX: ANZ) made an announcement today stating that ANZ Bank New Zealand Limited (ANZ NZ) is going to work with the Reserve Bank of New Zealand (RBNZ) on independent reviews of its capital models and attestation process to provide assurance that the bank is operating in a prudent manner.

As per the company’s release, an independent third party will be commissioned under Section 95 of the RBNZ Act, which will look at ANZ NZ’s compliance with its capital adequacy requirements.

Earlier, it was noted by RBNZ that ANZ NZ is persistently failing in its controls and attestation process, which is why last month, RBNZ revoked ANZ NZ accreditation to model its own operational risk capital requirement and advised the bank to undertake a full review of its attestation process, and assess its compliance with the capital regulations.

This is not the first time that any bank has faced heat from RBNZ. Earlier in 2017, when Westpac New Zealand failed to comply with the regulatory obligations, RBNZ increased its minimum capital levels to protect the integrity of the capital regime and gave Westpac 18 months to satisfy the Reserve Bank.

As at 31st March 2019, ANZ NZ had $12.4 billion of capital in its balance sheet, making it well capitalised for future operations.

In the first half of FY19, ANZ NZ’s net profit after taxation (NPAT) of NZ$929 million, which was 4% lower than its previous corresponding period (pcp). The bank reported cash NPAT of NZ$1,114 million, which was 18% higher than the previous corresponding period, mainly driven by the sale of the life insurance company, OnePath Life (NZ) Limited and a 25% share in Paymark Limited.

Now, let’s have a quick look at Australia and New Zealand Banking Group Limited’s stock performance and the returns it has posted over the past few months. At market close on 24th June 2019, ANZ’s stock was trading at a price of $28.680, up by 0.491% during the day’s trade, with a market capitalisation of ~$80.86 billion.

CLICK HERE FOR YOUR FREE REPORT!
Tags:
Financial Australia and New Zealand Banking Group Limited (ASX: ANZ) ASX: WBC
All pictures are copyright to their respective owner(s).Kalkinemedia.com does not claim ownership of any of the pictures displayed on this website unless stated otherwise. Some of the images used on this website are taken from the web and are believed to be in public domain. We have used reasonable efforts to accredit the source (public domain/CC0 status) to where it was found and indicated it below the image.