Kibaran Resources Limited (ASX: KNL) is a public listed entity that holds 100 per cent interests in a combination of attractive upstream and downstream graphite businesses that are scalable, highly profitable and are poised for development.

The companyâs aim is to become a preferred partner for the long-term supply of environmentally responsible battery (spherical) and natural flake graphite products to clients in both emerging (lithium-ion battery) and established (recarburiser, refractory, lubricant) global markets.

With the growth in battery manufacturing and demand for electric vehicles, the demand for specialised spherical graphite product and natural flake graphite (feedstock) is rising substantially. Catering to this buoyant demand, Kibaran has developed a vertically integrated graphite business, that involves the following components: 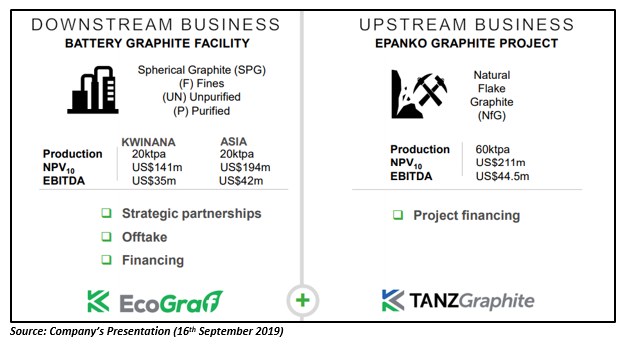 Kibaran holds 100 per cent interest in Epanko Graphite Project, which is a highly profitable, long life graphite project situated at about 370km from the Tanzaniaâs Dar es Salaam city.

The project is expected to produce 60,000 tonnes of natural flake graphite products every year and is likely to generate an internal rate of return of 38.9 per cent, annual EBITDA of USD 44.5 million and pre-tax net present value10 of USD 211 million.

To make the project ready for development, Kibaran has undertaken several activities in Tanzania, including extensive exploration, community development, feasibility and mine planning.

Kibaran has planned to fund the Epanko mine development through a combination of equity and limited recourse debt finance. The company has so far made encouraging progress to resolve concerns arising from the effect of Tanzaniaâs 2017 new mining legislation on global debt financing arrangements in the mineral sector and advance the projectâs financing program.

The company is targeting the total project debt finance of up to USD 60 million including USD 40 million from German financier, KfW IPEX-Bank and USD 20 million from second lender under the common terms loan facility with the German bank.

Recently, the company held meetings in Germany with KfW IPEX-Bank to evaluate progress with the submission for the Untied Loan Guarantee (UFK).

For equity investment in Epanko project, the company has been negotiating with numerous potential strategic partners. As anticipated demand for battery graphite continues to surge, a larger interest has been received from Asian and European industrial organisations, attracting investment focus to the sector.

In the long run, the company aims to build various natural flake graphite operations in Tanzania. The geophysical mapping conducted at the project signalled that it holds potential for further graphite mineralisation that could support in the extension of mine life and expansion of operations, allowing the project to act towards the expected growth in demand of graphite.

The company also holds 100 per cent stake in the Tanga Graphite Project (~200km north of Dar es Salaam) and the Merelani-Arusha Graphite Project (~55km SE of Arusha in northern Tanzania), both of which present the potential to assist in the future development of fresh sources of graphite production. 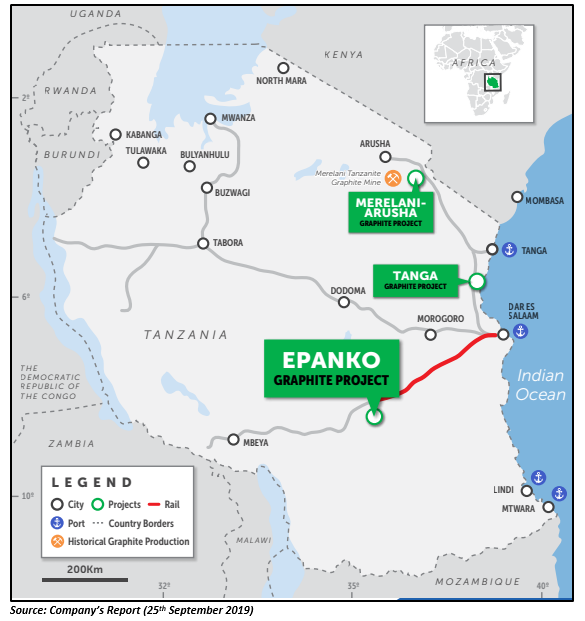 Epanko to support the Tanzanian economy

The company mentioned that the Epanko project is likely to impact the Tanzanian economy significantly, offering the following key benefits:

Moreover, the project is anticipated to offer inter-generational economic and social development in the long run within Tanzania, aiding its industrialisation goals by stimulating the formation of carbon product industries that need natural flake graphite.

In a nutshell, the Epanko mining project is independent of the EcoGraf manufacturing business and is ready for development. Bank funding processes are now advancing well as the Tanzanian mining regulations are being implemented, and the investment climate improves.