In this article, we would discuss three small cap stocks with recent updates. These stocks have been raising capital, developing patents and disruptive products. On 16 July 2019, S&P/ASX Small Ordinaries closed at 2895.01, down by 0.26 points from the previous close.

The consumer tech company, Cycliq Group Limited (ASX: CYQ) is involved in the production of e-safety accessories designed for cyclists. Some of the company’s products include- the rear-facing Fly6, front-facing Fly12 and so forth.

Conclusion of Capital Raising: On 15 July 2019, the group announced that a review of the business of Cycliq & Cycliq Products Pty Ltd (company’s subsidiary) was concluded. Subsequently, review of the business has resulted in the progress of short and medium-term business plans. Also, a detailed review of the funding requirements, order book, sales forecasts, cash flow and financial position was done.

The company had determined the need for capital to support the short-term working capital requirements to focus on enhancing the efficiency of inventory management and purchasing, debt payments and new product development. Cycliq group intends to undertake a share placement and follow on the rights issue.

Reportedly, the company has also received a confirmation to raise gross proceeds of $170,000 through the issue of fresh 170,000,000 fully paid ordinary shares (Placement Shares) to be issued at A$0.001 per share, and the completion is expected by 23 July 2019. Besides, a rights issue of up to $456,787 through the issue of new 456,787,252 fully paid ordinary shares at an issue price of A$0.001 per share (Rights Issue) has been planned by CYQ. Besides, the completion of the Rights Issue is expected to be concluded by October 2019, and the funds would be used for the same purposes as mentioned above.

Cost Savings: According to the release, a review of Cycliq’s cash requirements and expenditure has been consequential to the rationalisation of cost and reallocation plan, which is being implemented. Also, the focus of CYQ has been to lessen and ensure smooth running of the corporate and administration expenditure, along with the implementation of tightly controlled expenditure towards the sales and marketing of the products.

PFG Update: As per the release, the company’s inventory funding facility partner, Partners for Growth V. L.P. (PFG), has supported the approach by CYQ - to attain sustainable growth in the upcoming year, and the existing facility with PFG remains in place. Also, PFG and CYQ entered a Forbearance and Amendment Deed on 15 July 2019 to revise the terms of repayment of the over advance. Besides, the deed involves a grant of a warrant to PFG for 75,000,000 shares at a price of A$0.001 per share in the- capital of the company.

Business & Initiatives: As per the release, the pre-existing distribution agreements were expired over the past year, and new orders being placed, resulting in a stable and effectively recurring revenue from these partnerships. Also, the discussions with distributors have affirmed the strong demand, and expansion of the distribution network is anticipated in the coming months.

Besides, the company has also made several enhancements in the existing product line-up over the previous months, which resulted in escalated quality control, reduced support requests and product return and improve customer satisfaction. Meanwhile, CYQ is investing in research & development of new product.

On 16 July 2019, Parkway Minerals, the exploration company, has announced that it has obtained Deed of Letters Patent No 2015349594 from IP Australia. Accordingly, the patent is regarding the innovation of the K-max process for extracting potassium from an array of minerals. 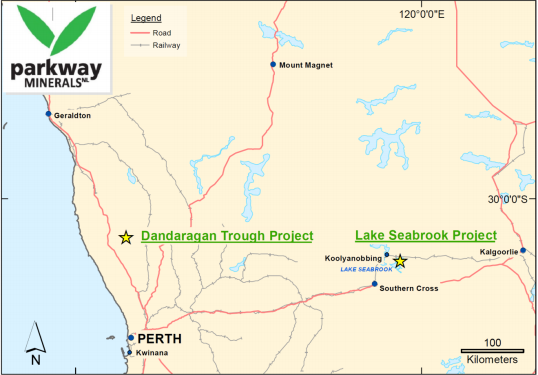 Background: The Dandaragan Trough in Perth WA is situated in an area with good infrastructure, adjacent to road, power and gas. Reportedly, PWN has identified resources of potash and phosphate at the Dinner Hill Deposit along with an exploration target at the Dambadgee Prospect; both the targets would apply the K-Max process. Also, ~60% of the greensand is covered with Glauconite – a phyllosilicate mineral, which is known for chemical bonding, enabling the breaking down of minerals. Besides, this allows potassium and magnesium to be extracted with lower energy consumption compared to other potassium rich minerals, such as feldspars, and K-Max process makes the best use of it.

K-Max Process: As per the release, the process uses atmospheric leaching, along with the sulphuric acid to break down the glauconite and extract ~95% of the contained potassium, aluminium, iron, magnesium and any residual phosphorus. Further, some selective crystallization stages and a calcination stage results in the Sulphate of Potash (SOP), a high magnesium SOP, aluminium sulphate and iron oxide.

Next Steps: The small cap company is looking ahead to make progress at the Dandaragan Trough project and intends to complete a pilot plant run utilising glauconite from both Dinner Hill and Dambadgee. Reportedly, the process data from pilot plant run would be used in the prefeasibility study, that would confirm the financial metrics of the project utilising K-Max to produce potash & phosphate fertilisers. In addition, the confirmation of the patent has been a milestone for the company to represent ownership of K-Max along with the capability to extract potash from glauconite.

Australian innovative company, Nanollose is engaged in developing fibres, to substitute the traditional cellulose fibres obtained from plants. It is also engaged in the research and development of such products.

On 16 July 2019, the company reported that following the successful manufacturing of a Tree-free viscose fibre for nonwoven applications in April last year, the fibre has been successfully converted into a nonwoven fabric. Accordingly, the development marks a milestone and the latest breakthrough in Nanollose extensive Research & Development program to develop high-performance and eco-friendly products for multi-applications across the global textile market.

Meanwhile, the product has been produced in a pilot scale utilising the industrial equipment and process currently used by manufacturers, which depicts commercial flexibility of Nanollose technology for the production of nonwoven textiles.

Market Dynamics: Reportedly, the nonwoven textile market consists of two part: durable and disposable. Further, the disposable nonwovens are used for a short period of time to single use; this includes multiple products like diapers, surgical gowns, feminine hygiene and wipes. Meanwhile, the durable nonwoven is used for an extended period; this includes filters, automotive carpet, mattress fabrics etc.

As per the release, the nonwoven market was for around US$44.37 billion in 2017 and is expected to reach US$98.78 billion by 2026. Also, the growing need in the personal care and automotive industry could propel the growth.

Commercial Strategy: Reportedly, the small cap company intends to take advantage of the growing market for baby diapers, wipes etc. Also, NC6 is well positioned to capitalise on the growing need for sustainable products by the manufactures. Besides, the samples regarding nonwoven fibre and fabric have been sent to leading industry payers, the feedback has been great, and due diligence is underway to test the performance of the product.

Besides, the company has appointed a Non-Executive Director Heidi Beatty, with above 20 years of experience in developing consumer and health care products. Further, the addition to the Board brings technical expertise and commercial knowledge of the nonwoven and hygiene markets.