Technologies give lucrative opportunities to people and businesses as well as the broader economy. Over the coming years, a range of emerging technologies is expected to change as well as improve fundamental tasks and interactions. Below discussed are three companies operating in the Australian Information Technology sector. Let us have a look at their recent updates and performance on ASX.

Headquartered in Melbourne, Australia and listed on ASX in May 2006, Praemium Limited (ASX: PPS) is a provider of portfolio administration services. It provides technology platforms for managed accounts, investment administration and financial planning. Currently, the company serves more than 1,000 financial institutions and intermediaries in Australia, Asia and the United Kingdom.

On 15 July 2019, PPS gave an update regarding the quarter ended 30 June 2019, which is also the company’s first full quarter as a completely integrated managed accounts platform. It reported record quarterly gross inflows of $ 903 million from the Australian and global markets during the quarter, compared with $ 717 million reported during the same period a year ago. Its platform funds under administration (FUA) stood at $ 9.53 billion, including $ 405 million in net inflows and $ 244 million in market movements.

IMA accounted for 8% of the total growth reported in FUA during the June quarter. Total FUA, inclusive of the VMA Administration Service (VMAAS) for the first time, reached $ 16.1 billion.

Praemium also provided business highlights for the June quarter. Some of them are:

Whispir Limited (ASX: WSP) is a global software-as-a-service (SaaS) company, headquartered in Melbourne, Australia. The company, which was founded in 2001, provides a communications workflow platform that automates interactions between businesses and people. By using cutting edge technology, its cloud-based communications platform brings email, text messaging, web chatting, and other communications channels together in one accessible space.

Australia, New Zealand, Asia and North America are WSP’s key regions. The company employs a staff of 127 people across eight cities in Australia, New Zealand, Singapore, Jakarta, Seattle and New York City, as of 31 December 2018. The stock of Whispir Limited is trading at $ 1.470 on 15 July 2019 (AEST 12:42 PM), down 2% from its previous close. It has a market capitalisation of $ 154.8 million and 103.2 million shares outstanding.

On 19 June 2019, the company notified the Australian Securities Exchange regarding its interest of 60,459,491 fully paid ordinary shares or 58.6% of the issued capital of Whispir Limited. The interest aroused by virtue of the voluntary escrow arrangements, which the company reached with certain of its shareholders as part of its $ 47 million initial public offering (IPO). The company started trading on ASX on 19 June 2019 after completing an oversubscribed IPO, which comprised 29.4 million shares at $ 1.60 each. The company intends to use proceeds from the IPO to progress its technology development, boost sales and marketing activity and pursue new growth opportunities in Asia and North America. Wilsons and Ord Minnett managed the IPO, which was oversubscribed by domestic and international institutional investors. 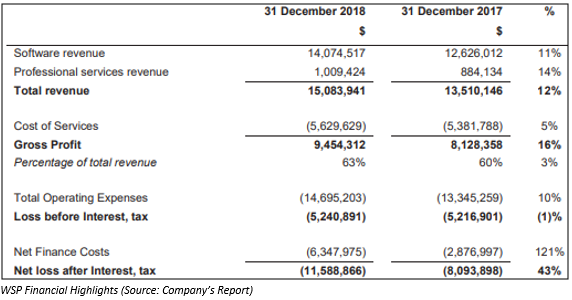 Class Limited (ASX: CL1) is engaged in the provision of cloud-based self-managed superannuation fund administration software solutions and services. Serving the wealth accounting market of Australia since 2009, the company serves both SMSFs and non-SMSF entities.

During the quarter, the company appointed Dan Coutts as CTO, James Delmar as Chief Sales Officer, and Jason Wilson as Chief Product and Marketing Officer.

On 2 July 2019, Class Limited signed a deal with wealth accounting group Findex, under which the former will provide a trust accounting solution for the latter’s family office clients. Moreover, Class is responsible for the development of a range of features in order to completely automate and simplify the complex needs of trust accounting. The features would result in unparalleled efficiencies for Findex. Moreover, these features will provide similar benefits to other accounting firms engaged in the management of these complex investment entities in the country.

The company is likely to release its annual report for FY19 on 20 August 2019.