These Four Stocks are in Trading Halt, Know Why!

While the Australian benchmark index bounced back sooner than anticipated from COVID-19 driven market crash, all eyes are glued to equity market’s forthcoming performance as fears of second wave of infections gather pace.

The S&P/ASX 200 index has revived by over 25 per cent since the market crash on 23rd March 2020 (as on 15th June 2020), backed by the nation’s success in containing COVID-19 spread and implementation of robust monetary and fiscal policy measures. However, ASX has been experiencing losses for the last three trading sessions in a row amidst a fresh swing of coronavirus cases in Beijing suppressing investors’ optimism.

Though ASX has erased a considerable amount of gains made in June till date, prospects of market recovery seem bright on hopes of swift revival in nation’s economy. Federal government’s latest plan to accelerate the progress of 15 infrastructure projects worth $72 billion, coupled with lifting of social distancing restrictions are likely to endorse the economic upswing.

Having said that, let us discuss few ASX-listed stocks that have been garnering attention in Australian share market for their securities being in a trading halt, pending them release significant announcements:

The securities of telecom player, Uniti Group Limited (ASX:UWL) are being placed under trading halt, awaiting an announcement concerning completion of accelerated institutional investor component of a non-renounceable entitlement offer.

The proceeds from the Entitlement Offer ($270 million), coupled with a new $150 million debt facility and 84 million Uniti shares would be used to fund Uniti’s acquisition of OptiComm Ltd (ASX:OPC). Uniti has lately entered into a scheme implementation deed with OptiComm under which the Company would acquire 100 per cent of OptiComm’s shares on issue via recommended scheme of arrangement.

The acquisition is targeted at creation of a large scale, growing national private fibre challenger with enhanced capability, scale and adjacent market access. The acquisition is expected to complete in late September, subject to satisfaction of all conditions precedent including approval by OptiComm Shareholders at the Scheme Meeting 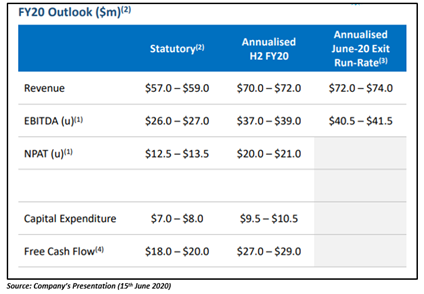 NSW-headquartered international environmental company, Phoslock Environmental Technologies Limited’s (ASX:PET) securities are in trading halt pending a release of an announcement concerning its earnings guidance. PET had earlier forecasted its revenue to be at $50-70 million in FY20, that was 100 per cent up on FY19 revenue.

PET notified in its latest Chairman’s Address at the AGM that it is in a best corporate position, both with regards to its balance sheet and management group. The Company’s announcement dated 25th May 2020 mentioned that it has over $50 million in cash and receivables with no debt, backed by the extremely successful raising of $30 million capital from Australian institutions, existing shareholders, and from the directors and executives.

On top of that Company has continued to strengthen its management team over the last three years, recently appointing Lachlan McKinnon as the new MD and CEO of PET.

The Company sees itself in a very secure long-term sales position owing to its unique product and the growing global need for clean water, whether for agriculture, aquatic life or human consumption. The Company believes it has the ability to expand and develop via new products, new services, better ways of doing business and more expansive corporate activity.

Super Retail Group has recently announced an underwritten accelerated pro-rata non renounceable entitlement offer to raise ~$203 million at a fixed price of $7.19 per share. The proceeds from the equity raising would enable the continued execution of the Company’s strategy and pursuit of strategic growth initiatives.

The Company has also uncovered its trading update, which highlighted the following:

What’s worth noting is that Super Retail Group delivered a resilient performance during COVID-19, backed by its omni-channel business strategy. The Company’s stock has delivered a significant return of over 20 per cent in the last three months.

The securities of lottery company Jumbo Interactive Limited (ASX:JIN) are placed in trading halt, pending it release an announcement regarding re-seller operations in Western Australia.

Jumbo has been grabbing attention for actively monitoring COVID-19 situation and the impact of the virus on its business operations. Amidst pandemic, the Company’s management implemented various measures to ensure enough capacity for online sales of lottery tickets to ensure smooth functioning of its operations during big jackpots.

All these companies are expected to commence normal trading on 17th June 2020 following the release of announcements. Also note, all figures in the article are in AUD unless otherwise mentioned.