Currently, there is a lot happening in the Aussie land- RBAâs further rate cut anticipation, companies riding high on the share market, global volatility and its consequences and events that are much-awaited.

In this article, we would acquaint ourselves with the famous Melbourne Cup and browse through 5 hot picks from the Australian Securities Exchange.

Australia gears up for its annual and iconic world-class event, the Melbourne Cup Carnival, (held on 5 November 2019). The event, conducted by the Victoria Racing Club combining sports, entertainment, fashion and food under one roof (the Flemington Racecourse) is full of glamour and history, and is regarded as a must-do for Melburnians and visitors alike. It takes place on the first Tuesday in November each year, and the day is commemorated with a public holiday for Victoria.

The history of Melbourne Cup dates back to 1840, when the first ever race-meeting was conducted on the river flats alongside the Maribyrnong (river) during the month of March. Continuing the long tradition, presently, the event is the richest handicap race held in the country wherein the prize money along with the trophies make it amongst the richest horseraces across the globe. During the event on the track, where several foreign horses enter the race, the tension is noticeably high between the trainers, owners, jockeys and punters.

On the day where Australians remind the world that they are the one of the globeâs biggest gamblers and splurge on a horse race that is an iconic event and one of the worldâs great races, experts believe that time and attitude is gradually changing. Acknowledging the growing discussions of animal welfare, there are movements and a broad surge in awareness of the welfare of racehorses.

Moreover, this year, the day is also the same wherein the Reserve Bank of Australiaâs Board decided to leave the cash rate unchanged at 0.75 per cent, balancing the need to keep pace with falling rates globally. Economists predict that the Central Bank will pause on further reductions until February to assess the impact of the recent rate cuts.

Let us now shift our discussion to the share market, and look at 5 stocks, which have been catching the investorsâ eye lately: 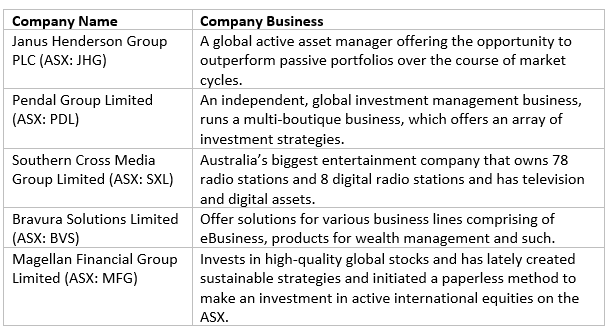 On 4 November 2019, Janus Henderson Group plc (ASX: JHG) purchased 15,568 CHESS Depositary Interests (CDIs) at an Average price of $34.24 paid per CDI, to be converted into a holding of Shares for cancellation. The purchase is related to the share buyback programme which was announced on 5 March 2019 (On-market buyback of CDIs).

Updating the market about the number of securities quoted on ASX, JHG notified that its capital comprised of 187,486,613 shares with voting rights and it held nil shares in Treasury (as on 31 October 2019).

For the quarter ended 30 September 2019, Pendal Group Limited (ASX: PDL) funds under management was $100.4 billion, down by 1%, and was supported by mildly positive global equity markets and a lower Australian dollar.

Outflows were reportedly $2.3 billion, primarily in the OEICs and the Westpac book. There was continued strong inflows into the US pooled funds (+$0.5 billion), while the annualised effect of the quarterly flows on the Groupâs fee income was reduced by $11.2 million. The favourable foreign exchange movements were $1.2 billion.

Southern Cross Media Group Limited (ASX: SXL) delivered a credible result in FY19 with Group revenue of $660.1 million (up 0.5% on pcp) amid challenging advertising markets. The underlying EBITDA was up by 0.9% to $159.9 million, supported by disciplined cost control while the underlying NPAT was up by 3.1% to $76.2 million.

SXLâs Board maintained fully franked dividends of 7.75 cents per share, in line with the prior year. The company is focussed on disciplined management of operating costs and has implemented actions to reduce operating costs in the second half of the year.

Moreover, SXL is increasing its investment in smart audio consumed via internet-enabled devices, both protecting and expanding its audiences and continues to operate its television assets effectively. The company is thriving to develop a culture of innovation to ensure that it continues to be a leading media organisation in Australia, the Hubble talent development program and Digital Marketing Agency being examples of the same.

Bravura Solutions Limited (ASX: BVS) notified that it will acquire FinoComp, an Australian software player that builds unique, registry-agnostic and flexible software that supports the UK wealth market, for a total consideration of $25 million. The acquisition is likely to intensify BVSâ technical competencies and establish a persuasive opportunity to provide âplug and playâ solutions to a wider addressable market.

The acquisition would also pave a path to capture a greater share of technology spend from BVSâ existing clients and provide substantial cross-sell prospects between FinoComp and its clients.

Interestingly, FinoCompâs revenue growth is projected to grow at ~27% in the next 3 years to reach $6.8 million in FY20.

Post the acquisition, the founders and high-ranking management of FinoComp are likely to be a core part of the business.

The discussed stocks built the investorsâ sentiment positively as they traded in green after the close of the trade session on 5 November 2019: