Leading electric vehicles manufacturer Tesla Inc. (NASDAQ: TSLA) has reported strong financials for Q3 2019, notwithstanding with the expectations of many short sellers.

Following the release of its quarterly results, Tesla’s stock rose substantially on NASDAQ, increasing by over 17% during the day’s trade on 24 October. Tesla being the second-most shorted stock in the US, has slammed the expectations of many short sellers with its strong quarterly results.

Despite reductions in the average selling price (ASP) of Model 3, the company’s gross margins have strengthened while its operating expenses are at the lowest level. The company returned to GAAP profitability in Q3 2019 and witnessed USD 383 million increase in its cash and cash equivalents balance to USD 5.3 billion.

Compared to the September quarter of 2018, the percentage of leased vehicles has increased by three times in Q3 2019 (refer below figure). 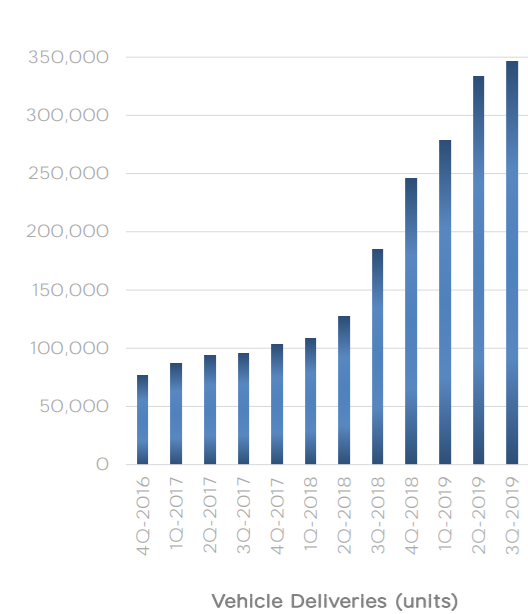 Why have investors shorted Tesla?

In the past, various investors have put forward their reasons for shorting Tesla’s stock. Tesla’s involvement in too many risky projects like spaceX, HyperLoop, Boring Company etc. has been a major reason why many investors have shorted this stock. Plus in the past, Tesla has been in the news for wrong reasons like Elon Musk’s twitter fights, faults in Car’s autopilot program, Car crashes etc.

A few months back, Tesla’s founder Elon Musk was accused of making misleading statements when he tweeted about taking the company Private resulting in an investigation by U.S. Securities and Exchange Commission (SEC). The controversial tweets by Elon brought lot of criticism on himself as well on Tesla.

Besides this, Tesla’s exposure to several risks, is one of the reasons why many investors are skeptical about this stock. Tesla in its last annual report has cited various risks that it has been facing. These risks include:

In the past one month, many investors reduced their short interest in Tesla due the expectations of stronger results, however, Tesla is still the second-most-shorted stock in the US equity market after Apple.

The electric vehicles manufacturer is focused on expanding its manufacturing footprint in new regions, launching new products and continuing to improve the customer experience, while generating and using cash sustainably.

At a time where the whole world is transitioning towards clean and sustainable energy, Tesla is acting as torchbearer, improving the world with its advanced technology and products. Since 2003, the company has broken new barriers in developing high-performance automobile and has established itself as a leading provider of energy products that incorporates solar, storage, and grid services.